There has been a lot of interesting feedback on my autopsy of the McCrory era.  One piece of feedback, in particular, was especially intriguing.  It comes from a Team 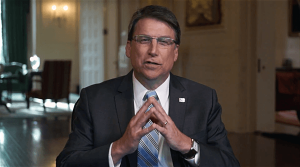 McCrory insider who is so inside they can tell you what the governor is having for lunch, oh, right about now.  Here is an excerpt from their take on my earlier piece:

[…] McCrory did not campaign hard enough, raise enough money, did not listen well enough to people who are better at campaigns, etc.  He has done a really good job with respect to our economy, budget, valuing veterans, etc  […]
I also believe the governor spurned state employees and many who he came in contact with, and likability is a large factor when people go into the voting booth. While I disagree with the article’s premise that McCrory won’t leave much of a footprint (he turned the economy around, established two new cabinet agencies, etc., I do believe his pandering and lack of political awareness played a large role in his defeat. […]

Bolded emphasis is mine, fyi.

11 thoughts on “An Insider’s take on the downfall of Gov. Pat”