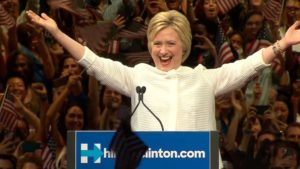 My thoughts about the FBI director’s press conference on Hillary’s email server?  He looked like a guy who was told to go out there and do what he’s told if he knows what’s good for him. If you listened to him carefully, and read between the lines, you actually heard him say: ‘I think this is a farce and a travesty, but I can’t do a thing about it.’

The facts pretty clearly paint a picture that Hillary Clinton used her position as Secretary of State to sell information to interested parties in exchange for BIG $$$ for her and her lecherous husband. What legitimate, legal purpose could there be for a top government official to have their OWN private email server — in their home — handling ALL of their official communication?  Answer: You do that so some State Department employee doesn’t stumble across your conversations with Sidney Blumenthal about your mutually beneficial business deals at the expense of the American

taxpayers AND US national security.  You do that so you can try and evade freedom of information requests and any subpoenas issued from Capitol Hill or DOJ.  State can’t turn over what they actually don’t possess.

The part director Comey mentioned about Hillary ”unintentionally” deleting 30,000 emails is a laugh.  Anyone who works in government — especially senior officials — knows that you DON’T delete work email.  EVER.  I’ve worked on and off with classified / legally protected confidential material over the years.  If I — or any of my coworkers — did 1/1000th of what Hillary did, we’d be subjected to spine-snapping fines and / or criminal prosecution.

Less than a week before Comey’s press conference, THIS HAPPENED:

[…] A Naval reservist was sentenced for mishandling classified military materials.

A federal attorney announced Wednesday that Bryan Nishimura of Folsom, California, pleaded guilty to the unauthorized removal and retention of classified materials.

Nishimura, deployed in Afghanistan in 2007 and 2008 as a regional engineer, admitted to downloading classified briefings and digital records onto his personal electronic devices. He carried the materials off base and brought them back to the U.S. when his deployment ended.

An FBI search of Nishimura’s home turned up classified materials, but did not reveal evidence he intended to distribute them.

That’s a pittance compared to what it looks like Hillary did.  It’s the same concept, but on a smaller scale.  The feds thought THAT was significant enough to prosecute.  (But 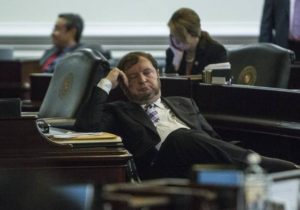 Mr. Nishimura was not a powerful, highly-connected person running for president who could credibly threaten the AG and the FBI director.  It was, um, *different.*)

Scooter Libby, Dick Cheney’s former chief of staff, got thrown in jail and basically had his life ruined over gossip about a CIA employee.  Hillary Clinton had thousands of pieces of classified information on an unprotected server IN HER HOUSE.

Let’s move to the state level.  State senator Fletcher Hartsell has been indicted for making misleading statements on his campaign reports, and using that money for all kinds of personal rewards and expenses.  Not long ago, state Rep. Stephen LaRoque was thrown to the legal wolves for various ethical and financial improprieties.

The funny thing?  You could randomly pick a campaign finance report from the files of the state board of elections and find a powerful legislator who has done things about as shady as Hartsell has.  (For example: House committee chairman Jason Saine and his $19,000 in clothes?  His $120,000 in “campaign expenses” in an election cycle when he had NO OPPOSITION?)

But the powers-that-be will tut-tut over LaRoque and Hartsell, and then turn to us and say: ”Hey, we fixed it.  Justice is served. Everything is OK.  Go back to what you were doing. And, um. so will WE.”

The whole exercise, as it is, is about as pointless as a trooper pulling over one driver while 20 more speed by at 80 MPH or more.

It appears we’ve come full circle — devolving into the same crap that our forefathers fled from in Europe.  Tyranny of the politically-connected elite at the expense of the “little people.”

We’ve got the power to stop it — if we want to use it.  Mindlessly reelecting the same amoral sleazes — because you remember their name or they helped granny get her check — will not do a damn thing to change our spiral down the drain.  Politicians have broken us financially and are hard at work doing the same in the ethical, spiritual and moral arenas.

Get educated.  Don’t rely on the liars in the driveby media or the worthless public education system.  There are plenty of independent sources out there that will get you the facts.  Know the issues when you go to vote. KNOW the candidates before you dare mark their names.  Liberty AND Justice FOR ALL is a concept that is quickly slipping from our fingers.

10 thoughts on “American politics: A stinking cesspool where rules and laws are meant for the little, less-connected people”