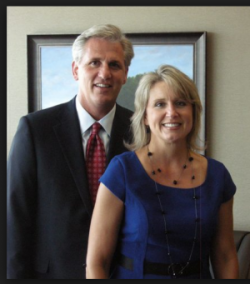 In 2009, The National Enquirer broke an explosive story about an up-and-coming North Carolina politician.  Supporters of said politician dismissed the report saying: “Hey, it’s the Enquirer.”

(And where is John Edwards now?)

Now, another controversial media outlet — the web site GotNews.com — has another North Carolina politician in their sights.  We reported earlier that Charles Johnson, the California-based publisher of GotNews.com, was looking to speak with former McCarthy and Ellmers staffers.    Now, we know why.

Johnson is reporting allegations that House Majority Leader Kevin McCarthy (R-CA) and Congresswoman Renee Ellmers (R-NC) have been involved in an extramarital affair:

Multiple sources within Bakersfield, North Carolina, & on Capitol Hill tell Gotnews.com that Majority Leader Kevin McCarthy (R-CA) and Renee Ellmers (R-NC) have been carrying on a long-running affair since 2011.

The affair is something of an open secret in Washington, D.C. Reporters at other publications, lobbyists, congressional staffers of both parties all know about it. One staffer for a congressman describes it as the “biggest open secret” in D.C. A lobbyist describes Ellmers as a “social climber who has ingratiated herself” with McCarthy.

House leadership also knows about the affair. Speaker John Boehner reportedly told McCarthy to stop the affair once McCarthy was elected Majority Leader says a well placed congressional staffer. At least one leadership staffer doesn’t think the affair ended. “They are unusually close,” says the staffer who insists that the affair is going on. “It’s weird if he’s not [expletive] her.” […]

Ellmers, who was elected in 2010, has traveled with Kevin McCarthy throughout North Carolina on the campaign trail in 2014. McCarthy campaigned for Ellmers during her 2014 primary challenge with radio talk show host Frank Roche.

The New York Times discussed McCarthy and Ellmers’s working relationship in a 2011 article.

McCarthy, who can’t stand the sight of blood, appreciates the ex-nurse’s toughness. Ellmers is one of nine women in this high-testosterone freshman class and has to find her own way of being heard. She barraged McCarthy with e-mails and phone calls saying she saw little sense in the G.O.P. leadership’s decision in June to send the White House a message by bringing to the floor a ”clean” (or condition-free) debt ceiling and then resoundingly voting it down. Sometimes when Ellmers is talking to the whip and doesn’t think she’s getting through to him, she claps her hands loudly in front of his face. Sometimes McCarthy giggles and claps back.

The two Republicans travel together, campaign together, and support one another in conferences.

The trips coincide with when the affair is said to have occurred. […]

Calls and emails to Reps. Ellmers’s and McCarthy’s offices were unreturned.

Gotnews.com also reached out to Brent Ellmers, her husband, but hasn’t heard back. His number from his medical practice has been discontinued.

More to come ????  That doesn’t sound good.  For the sake of her husband and her son, we HOPE this is not true.