The state ABC board — an entity that should have been dissolved YESTERDAY  (Why is the state in the alcohol sales business?)  — is getting a familiar faces as its new top dog. 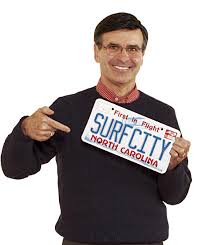 Long-time Surf City mayor Zander Guy — no relation to our VERY OWN Zan Bunn — has been tapped by our somnambulant governor to head this patronage and corruption-laden organization.

Guy was previously appointed to the ABC board in 2009 by Bev Perdue.  Here’s what John Hood’s employees had to say about THAT:

While currently employed as the owner of a real estate company, that wasn’t Zander’s first profession. He used to be an insurance agent, that is until he was convicted of defrauding clients and sentenced to three years in prison. Rumor has it he was just pocketing the insurance premium checks his clients sent in, never actually purchasing the policies. After serving just three months of his three year sentence, his time was commuted by then Gov. Jim Martin (and later pardoned him).

Since that ugly incident in the past, Zander has built his new real estate empire. While there is no wrongdoing that anyone can point to, it doesn’t take much of an imagination to think of the potential conflict of interests for a Mayor of a town being a real estate agent as well. If a builder or developer wanted to make sure they got a permit, who do you think they would choose as their real estate agent?

Also intriguing is the message Perdue is sending the message loud and clear that seats on boards and commissions are for sale. According to records from the State Board of Elections, Guy has given in excess of $222,000 in donations to Democratic candidates or the state party over the past two decades (including $25,000 to the NC Democratic Party just last year.) […]

Between him, his wife and son, the Guy family has given $27,600 to Gov. Bev Perdue’s campaigns.

What may be most intriguing is Guy’s son, A.D. Guy III, works for a beer distributor in Georgia. Hmm… ABC board, beer distributor… nah, nothing out of the ordinary there.

Big donor.  Of Course.  It’s clear money talks on BOTH SIDES OF THE AISLE.  Son works for a beer distributor.  Dad heads the NC ABC board.  * Nah, NO CHANCE for conflict here.*

(You know, it’s actually cheaper to buy your alcohol at South Carolina package stores and drive it over the border than to buy it at a NC ABC store.  And down south, they don’t CARE if you want it on Sunday.   And let’s not forget the Pembroke ABC store. Employees were giving away alcohol.  There was surveillance video of alcohol theft by employees.  The store was closed for a short time, but Raleigh allowed it to reopen. )

Perdue’s appointment of Zander Guy to the ABC board has done nothing but further the perception that politically connected insiders and big campaign donors get appointed to state boards and commissions. Guy is already on the Banking Commission, is there no new blood out there that Perdue can find to appoint to the ABC Commission?

Retreads.  We saw this in the McCrory administration, and are seeing it here with Cooper.  Both parties have their cliques, and they keep the power closely tied to those cliques.  The Republicans haul out Jim Gardner, and the Democrats haul out ol’ Zander.

How can you expect to drain the swamp when the same ol’ gators keep populating the place?