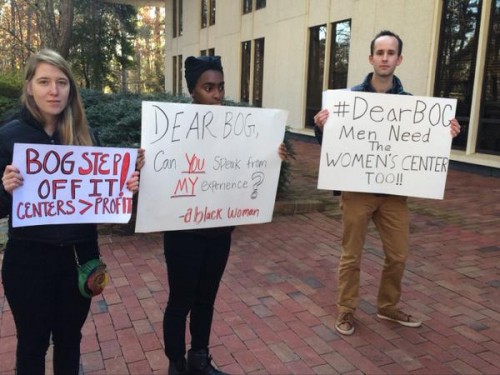 The UNC Board of Governors is holding hearings on whether to consolidate or cancel out all of these state-funded “institutes” and “centers” based on the UNC system campuses. Lefties don’t like to think about the possibility of cutting money for anything — except stuff like cops or the military.

One of the centers up for review is Gene Nichol’s Center for Poverty and Work at UNC-Chapel Hill — which was originally created as a pit stop for John Edwards between presidential campaigns and extramarital conjugal visits with the videographer. We’ve written about Nichol before — his bloated torso, his bloated salary, his bloated ego, and the extraordinary amount of time he spends using his university position to spin for the radical left.

In response to concerns regarding education spending

(and the AfAm scandal at UNC), the legislature directed the BOG to start reviewing these centers for the possibility of transferring some funds to more vital areas.  Leftists – -who all tend to believe they are entitled to OUR money — do not like this development one bit.

Blinkin’ Chris and his crew have roused the drum circle crowd to protest the board of governors meeting.  Blinkin’ Chris has even dispatched Sarah Ovaska — who, according to the special female objectification task force here at Haymaker HQ, has been determined to be “quite cute for a commie”  — to live-tweet the event.  Here is one of her best of the day:

Unfair to minorities?  *Oh, of course it is.*   Ms. O also posted a little bit on the meeting for Blinkin’ Chris’s web site:

[…] The group whittled down its examination to 91 centers that receive $49 million in direct state funding, most of which are located at the state’s two largest research campuses, UNC-Chapel Hill and N.C. State University.

Members of the Board of Governors conducting the review say it’s premature to say whether any centers will be eliminated and are looking to see if centers on different campuses are duplicating efforts, have limited roles teaching students or receive federal or other types of research funding.

“We don’t have a predetermined outcome,” said James Holmes Jr., a Raleigh accountant appointed to the Board of Governors in 2011 by the Republican-led legislature.

Those 91 centers and institutes (scroll down to see a list) also received more than $189 million in other sources of funding, according to documents provided by the UNC system. The process is expected to finish by the end of the year.

The long list of groups under review range from the Center for Turfgrass Environmental Research and Education at N.C. State University ($589,026 in state funding) to the Chapel Hill-based Center on Poverty, Work and Opportunity, a center run by Gene Nichol*, a controversial law professor whose public criticisms of the state’s current political leadership have rankled some on the UNC Board of Governors.

The poverty center receives no direct funding from the state’s general fund but did receive $20,550 in in-kind support from the university system and $28,394 in other forms of funding, according to documents from UNC.

Holmes, who has been leading the review committee, said he hopes final recommendations are finished in December, so that the full UNC Board of Governors can take any needed action at its January meeting.

“A lot of people have looked at this with a level of skepticism,” Holmes said, about outside speculation about what motivated the review. “It’s been fair, logical and objective.”

He added that the review, the first time all of the centers in the UNC system have been examined, did not stem from changes over the last few years in the state’s political leadership.

“This is a conversation that has been going on a long time,” Holmes said. “This is not a partisan issue.”[…]