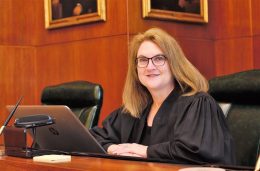 “Dallas stated that the party had spent $350K on Justice Edmunds race and his only regret was spending anything at all.”  Hmmmm.  *Nice.*

What’s the point of even having a party if you’re not going to fight the opposition or defend your incumbents?  (Just curious.  Was it considered a wise investment to throw all that money at the Useless Twins, Bill Brawley and Nelson Dollar?)

Also — HOW did the party have the resources for Paul Newby AND Mark Martin, but not Edmunds nor Jackson?

Her honor was not finished:

Wait.  I thought Hasan Harnett was tossed out because he couldn’t keep the party competitive financially.  (It looks like Grandpa Hip-Replacement can’t either.)   I thought Grandpa’s alleged fundraising prowess was what got him past Jim  Womack two years ago?  (It’s funny how reality so often doesn’t match campaign rhetoric.)

Wait.  There was even MORE:

Boom!  Exxxxxxxxactly.  This is one smart lady.  It’s too bad she was done so wrong.

31 thoughts on “Woodhouse: It was a mistake to spend even ONE DIME on Justice Robert Edmunds in 2016.”