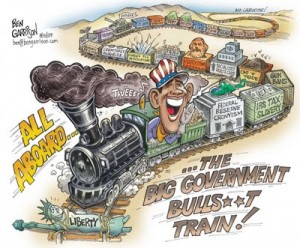 $100 million for ONE US Senate race. Most of it flooded in from out of state.  What is this all about?  Why are all of these people willing to fork out so much for a US Senate seat from North Carolina?

If it can be done, government tries to regulate it.  (No kidding.  There are regulations and studies dealing with COW FLATULENCE.  There are also attempts to regulate carbon dioxide — which we exhale. )

Lobbyists are paid to protect certain interests from government busybodies.  As the busybodies expand their scope of influence, we get more regulations and rules and therefore MORE LOBBYISTS.   Those lobbyists write a lot of checks to politicians.  They also hand out a lot of goodies and other favors that politicians appreciate.

Lobbyists for Texas oil interests throwing politicians huge checks and giving great gifts.  And you wonder why it is so hard to get ANYBODY in EITHER party to shrink the size of government.

A big, expansive, meddlesome government gives politicians and unelected bureaucrats power.  It allows them to influence the lives of a lot of everyday people.

If you actually got government out of everything not specifically mentioned in The Constitution, 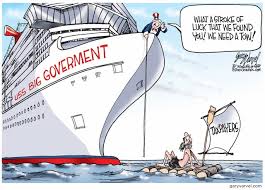 you’d have a lot less demand for lobbyists.  There’d be a lot less cash flowing into campaign coffers.  A lot fewer “free” European and Carribean golf trips. You wouldn’t have nearly as many Karl Rove types and DC PACs trying to buy various elections.

Don’t add to the problem by introducing even more regulation into our lives. Reduce the demand for lobbyists and PACs.  Shrink government’s influence. Let all of the ingenuity and diligence out there among the people catch fire and create more opportunities and more economic growth than any government program or “job creation” legislation EVER COULD.  Leave The First Amendment AND the people who actually make this country work ALONE.

2 thoughts on “Want to get BIG money out of politics? Shrink Big Government.”