We have stuff — audio, video, photos, pdfs, and the like — coming over the transom all the time and dropping into our laps.  One of the latest arrivals is an audio recording of US Rep. Virginia Foxx (R-5th-NC) talking with some voters during The Civitas Institute’s Conservative Leadership Conference in Raleigh at the end of March.

One of our moles was close by when the conversation occurred, and confirmed for us that it is indeed Foxx on the recording.  She’s very pleasant with the voters, until she learns at least two of them — North Carolinians Ginny Quaglia and Mary Ann McCarthy — are affiliated with Heritage Action,  the DC-based Heritage Foundation’s political wing.  Foxx can be heard on the tape saying to the reported Heritage activist:

“You don’t really care if we’re in the majority or the minority.  You’ll raise your money anyway.”

The group of voters — including the Heritage activist — can be heard on the tape quizzing Foxx about congressman Mark Walker’s “A+ Amendment” to HR 5 (Reauthorization of No Child Left Behind.)

Foxx can once again be heard on the tape training her fire at Quaglia and McCarthy: 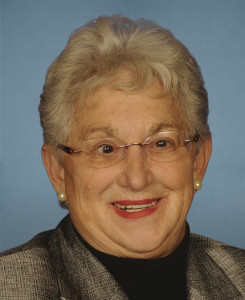 “It’s only because of Jim DeMint’s ego that you wanted that A-plus amendment.  There is no sense of accountability there.  Look at A+ and show me where there’s any accountability.”

This all sounds incredibly similar to another caught-on-tape rant a few years ago by congresswoman Renee Ellmers.  DeMint and his crew are clearly getting under the skin of the GOP establishment in DC.

Foxx can also be heard on the tape bristling at conservative criticism of Speaker John Boehner and his leadership team. (Foxx is a member of the House Republican leadership team, herself.) :

“Don’t impugn Boehner’s conservative credentials.  John Boehner fought Barack Obama and Harry Reid tooth-and-nail for those opportunity scholarships.  He is totally responsible for getting the money and setting them up.”

Foxx can also be heard on the tape challenging a voter’s assertion that House Republicans ought to take a tougher stand on spending:

”No, ma’am.  You stop saying that.  Show me in The Constitution where it says the House controls the purse-strings.”

Foxx must have stopped and thought about that, because she did a little back-pedaling and CYA:

“Yes, revenue bills begin in the House.  Yet, the Senate has to concur and the president has to sign it.”

Foxx can be heard on the tape lecturing the voters about how “incrementalism” is the only way to (there it is) get things done in Washington.  (*Yeah, kind of like how the Democrats behaved in shoving ObamaCare down our throats in 2009.*)

Some of the other profundities oozing out of Ms. Virginia’s mouth included: (1) dismissing town halls as a waste of time (“You can write me a note or call me.”), and (2) suggesting that you need to possess an actual House of Representatives voting card to truly “know what it’s really like” in DC.

It’s pretty clear this woman has become a creature of Washington.  The folks back home are an annoyance.  She’s forgotten where she came from.

20 thoughts on “Virginia Foxx: Hatin’ on Heritage. (Lovin’ some Boehner.)”