In 2014, the Tillis campaign for US Senate smacked Kay Hagan around for skipping an important hearing for a campaign fundraiser.  In 2020, it appears ol’ Thom and his team are  doing the SAME DOGGONE thing they jumped on Miss Kay about:

Tillis is a member of the committee, which held a hearing last Wednesday afternoon to consider a range of legislation, including bills addressing veterans’ mental health care, homeless veterans and a bill that would address exposure to potentially toxic substances at Camp Lejeune, a Marine base in eastern North Carolina.

There is no evidence of Tillis attending the hearing. He is not seen in any portion of the video from the hearing posted on the committee’s website and there is no other record showing he took part in the hearing.

Later on Wednesday, Tillis missed a number of floor votes in the Senate, including one to confirm a new federal judge in the Western District of North Carolina.[…]

Sounds like he skipped out on a whole lot of what we sent him to DC to do.

I feel like I’ve hopped in the DeLaurean with Marty McFly, and traveled back to 2014 to find that our buddy Thom has become Kay Hagan.   Team Tillis is doing all the stuff they popped Madame Hagan for five years ago!

[…] Instead, Tillis spent the day in North Carolina, the Associated Press reported, where he attended a fundraiser in Greensboro with Vice President Mike Pence, Republican National Committee Chairwoman Ronna McDaniel and Louis DeJoy, who was announced last week as the lead fundraiser for the 2020 Republican National Convention, to be held in Charlotte.

When asked why Tillis decided to skip the VA Committee hearing, a spokesman for the senator did not directly answer the question. [….]

I can’t blame the spokesman.  Who would have the nerve to actually say: “You’re right.  The boss loves cash more than he loves his wife, kids, his dog — anything.   Hey, they weren’t handing out cash at the Veterans Affairs hearing.”

The damage control effort by Team Tillis on this one so stretched the boundaries of plausibility that even the usually quite gullible drive-bys weren’t buying it: 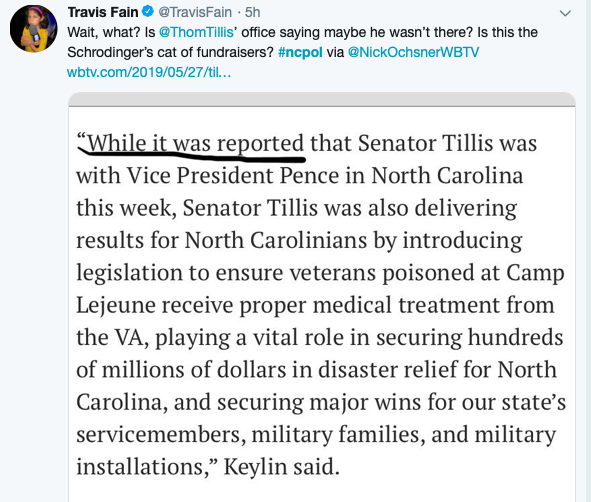 For those of you who aren’t Big Bang Theory fans, here are the deets on Schrodinger’s cat.