That’s what it looks like.  And a group of conservatives, from the House and Senate (including our very own Mark Meadows), is calling them out on it:

Conservative senators and allied outside groups are on the verge of rebellion against the Senate’s Obamacare repeal effort, potentially derailing delicate negotiations to overhaul the nation’s health care system. 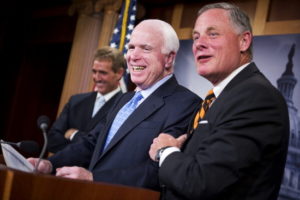 As Obamacare repeal talks enter crunch time with a vote as soon as this month, the Senate bill continues to tilt toward more moderate members of the GOP on keeping some of Obamacare’s regulatory structure and providing a more generous wind-down of the law’s Medicaid expansion. The movement has made Republicans increasingly pessimistic that two critical conservative senators, Mike Lee of Utah and Rand Paul of Kentucky, will be able to vote for the GOP’s ultimate agreement on health care, according to senators and aides.

“I think [Lee is a no]. And Rand will be a no,” said a Republican senator granted anonymity to discuss sensitive internal conference matters.

Losing those two senators would be a major blow that would allow Senate Majority Leader Mitch McConnell no further defections in his 52-senator majority and make Sens. Susan Collins of Maine and Lisa Murkowski of Alaska the key swing votes, further imperiling conservatives’ negotiating position in a Senate in which McConnell needs 50 votes at a minimum.

Worry is increasing among conservatives inside and outside the Capitol that the bill is “tipping toward the moderates,” said a Republican working on the repeal effort. And after weeks of sparring, the tug-of-war between conservatives and more centrist Republicans is finally reaching its climax.

“I don’t think it’s insurmountable. But I think the passion’s going up on each side,” said Sen. Shelley Moore Capito (R-W.Va.), who is pushing for more robust Medicaid benefits against conservative opposition. “The heat’s definitely rising.”[…]

THIS is what you get when you evolve to a party that stands for ABSOLUTELY NOTHING.  These guys are setting us up to get screwed over on THE ONE ISSUE that gave them a majority in the first place.

[…] On the right, Sen. Ted Cruz (R-Texas) has also voiced skepticism with the party’s description, saying the party has a “long way to go” on the repeal effort, and Sen. Tom Cotton (R-Ark.) is also said to be growing wary of the party’s direction, GOP insiders said. But both are currently viewed as more gettable than Lee and Paul, two senators who have shown a consistent proclivity for bucking McConnell.

Since there is no bill text yet, both Lee and Cruz have declined to take an official position on the emerging proposal. Lee declined to comment for this story, while Paul said he’s still attempting to push the bill to the right. The Kentucky Republican, however, has been on a warpath in the GOP Conference lunches over the past week and Republicans do not believe he will vote with them.

In an interview this week, he charged that the House bill is bad enough because it keeps “90 percent” of Obamacare, said he opposes the creation of high-risk pools favored by many Republicans, and urged Republicans to abandon attempts to save the individual marketplace with an infusion of cash.

“We promised the voters that we’d repeal Obamacare,” Paul said. “Instead, we want to repeal sort of a tiny bit of it and replace it with something that looks a lot like Obamacare.”

One reason they aren’t officially “no” votes is that negotiations could yet tilt rightward next week as Republicans near a decision point on what exactly they will put on the Senate floor. And the conservative concern is broader than just those two senators, as Sen. Pat Toomey (R-Pa.) fights to restrain future Medicaid spending and Cruz urges dismantling of Obamacare’s regulations.

“The outline leadership has presented isn’t Obamacare repeal, in fact it isn’t even reform. It’s a tax cut and a corporate bailout masquerading as health legislation,” said a conservative Senate aide.[…]

3 thoughts on “US Senate ready to blow O-Care repeal?”