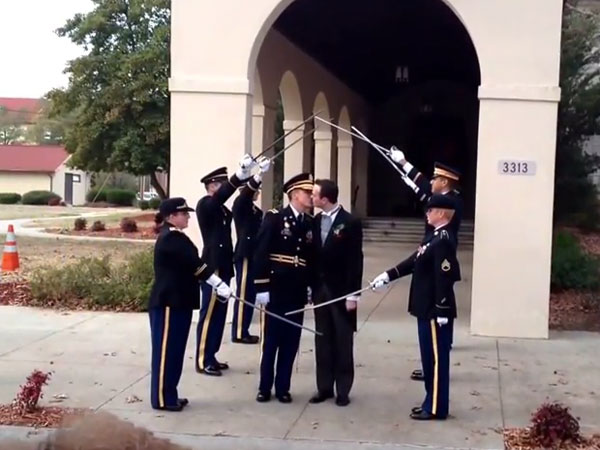 To a lefty, tolerance means: “Approve of what I approve of, or you’re a bigot and a hater.” One of the places that can be found exemplified is in the ruling class’ political contortions to “respect” Islam while stomping all over the Judeo-Christian beliefs that are so prevalent right here in our homeland.

One of our readers informed me this week that he was rebuffed by The Department of Defense and the Postal Service in his efforts to send a Christmas care package to his son-in-law currently deployed in Afghanistan.  What was this reader’s “offense”?  He tried to send some Slim Jims — one of his son-in-law’s guilty pleasures — through the mail to Afghanistan.  Apparently, there are regulations in place prohibiting sending pork products to American military bases in Muslim countries.  In case you weren’t aware, Muslims don’t care very much for pork.

In May 2012, the voters of North Carolina overwhelmingly approved a constitutional amendment defining marriage as being between a man and a woman.  This week, the mainstream media and the political class cooed over the first same-sex wedding at Fort Bragg’s chapel.  We even got treated to a front page pic from the event.  In Afghanistan, the federal government is bending over backward to respect the customs, wishes, and beliefs of the dominant religious group.  Not so here in North Carolina.

In July, a federal court cracked down on the practice of public prayer at the Rowan County board of commissioners monthly meetings.  In Afghanistan, our federal government is bending over backward to ensure the religious practices of the dominant religious group are being respected.  Not so here in North Carolina.

An effort is underway in federal court to force South Carolina  — where gay marriage is banned — to recognize gay marriages performed in other states where the practice is legal.

In Washington state, a florist faces the wrath of the bureaucracy, serious legal penalties and financial ruin for refusing to sell flowers for a gay marriage based on her religious beliefs. In Colorado, a baker is actually facing the possibility of jail time for daring to refuse to make a cake for a gay marriage.

The mayor of West Union, SC (pop. 300) and one of the guys on the Duck Dynasty show are being subjected to vicious attacks for expressing religious objections to gay marriage and the gay lifestyle.

It’s funny.  These lefties don’t have a word to say about what the imams in Afghanistan, Iraq and elsewhere are saying needs to be done to homosexuals — or, for that matter, everybody who doesn’t buy into Islam.  In the Obama era, if you’re not on board with the agenda of Team Barry — the only approved option for you is to SHUT UP and TAKE IT.