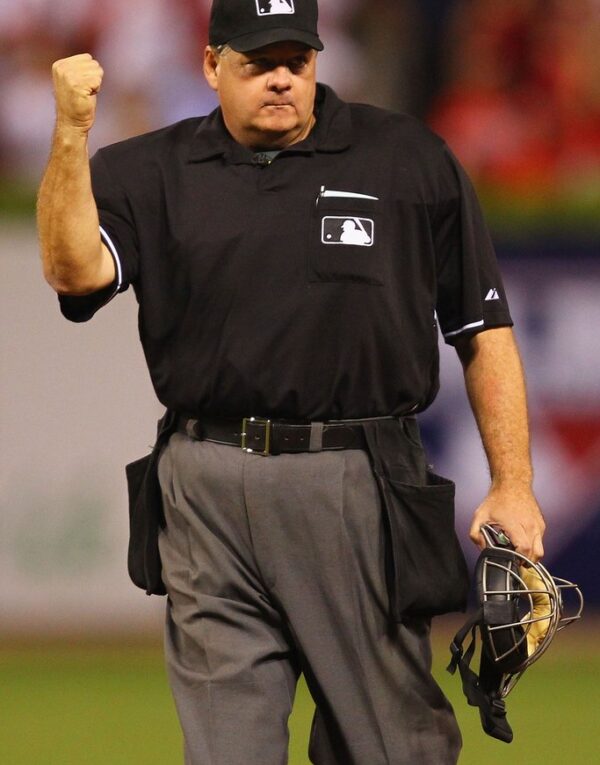 When things get tough, you can always count on RINOs to toss platform-supporting conservatives under the bus.  The US House Freedom Caucus is standing firm on the idea that conservatives actually be empowered in the new GOP House majority. Some quislings in the GOP caucus (MTG, et al.) have forfeited their ‘conservative cards’ in exchange for some committee assignments.

I don’t believe the idea is to throw the election to the Democrats.  We’re seeing a power-play with leverage being exercised.  It’s done in politics and business ALL THE TIME.  Far too often, we see alleged conservatives surrendering on the party platform to appease party leadership.  As a result, we have Republican complicity in the wrecking of our national economy. 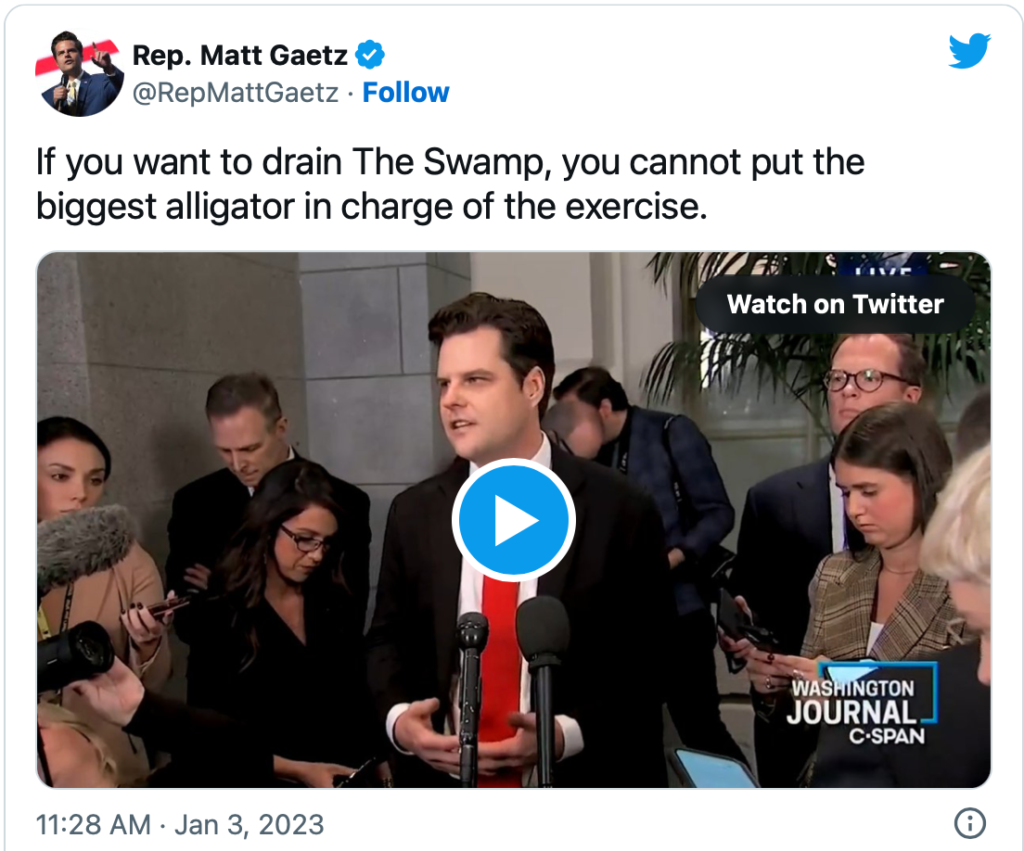 We’re hearing about RINOs stomping around and harrumphing with OK buttons on their lapels.  O.K. stands for “Only Kevin.”  That’s a cult of personality and NOT responsible government.  How about “Only small government” or “Only low taxes”? A junior-high mentality is sweeping the House Republican ranks.

Here’s the head of the Freedom Caucus talking about their stand against McCarthy:

Rep. Scott Perry said Tuesday he could still be a “yes” vote on Rep. Kevin McCarthy’s bid to become House speaker, but said more negotiations would be required to resolve demands from the right-wing Freedom Caucus.

Perry (R-Pa.), one of a group of conservative GOPers opposed to McCarthy (R-Calif.) taking the gavel, was asked on “Fox & Friends” hours before Tuesday’s vote whether he could change his mind.

“Let’s sit down and talk. There’s time,” he added.

According to Perry, one of the sticking points that is keeping him and other Republicans in the caucus from backing McCarthy for speaker is representation on House committees.

He acknowledged meeting with McCarthy Monday evening to discuss putting members of the Freedom Caucus on specific panels before the vote, but McCarthy refused, confirming a report by Punchbowl News.?

“This is how this works?,” Perry said, claiming that such assurances are typically made before the speaker is elected.

“Once the speaker becomes elected, then promises aren’t kept and there’s nothing you can do about it. ?..?. The speaker’s position is incredibly powerful? –? determines all committees, who’s on committee, chairs committees, and the policies that come out of committees?.” ?

But the Republican also reiterated the statement that he and other Freedom Caucus members made in an open letter Sunday — that they are seeking a “radical departure from the status quo” among House leadership.

“Kevin has been in leadership for 14 years. And nobody came to this town saying, ?’Well, Washington is doing great.? We don’t want to change anything.?’? It’s the status quo. ?The only way to change the status quo was to either change how we do things or change the people that are doing so?,” Perry told Fox.

In a separate statement Tuesday, Perry claimed that McCarthy had “balked” at the committee plan and refused to promise the hardliners votes on legislation mandating a balanced federal budget and term limits for lawmakers.

“We requested transparent, accountable votes on individual earmarks that would require two-thirds support to pass, and to ensure that all amendments to cut spending would be allowed floor consideration,” Perry said. “He dismissed it.

We demanded that he cease his efforts to defeat competitive conservative candidates in Republican primaries. He denied it,” the Pennsylvanian concluded. “Kevin McCarthy had an opportunity to be speaker of the House. He rejected it.”[…]

I KNOW for a fact that McCarthy aided and abetted a primary challenge to Madison Cawthorn, and campaigned aggressively against Greg Murphy — back when Murphy was pretending to be a Freedom Caucus loyalist. McCarthy has gone after conservatives all over the country in primaries.

What is so “extreme” about saying ONLY balanced budgets will be considered or passed in the House?  Why not consider ALL spending cut amendments?

He’s already promised committee spots to Jim Jordan and Marjorie Taylor Greene.  Why not to some of the Freedom Caucus folks? Committees are where all the big decisions get made.  Conservatives deserve to be at the table, too. 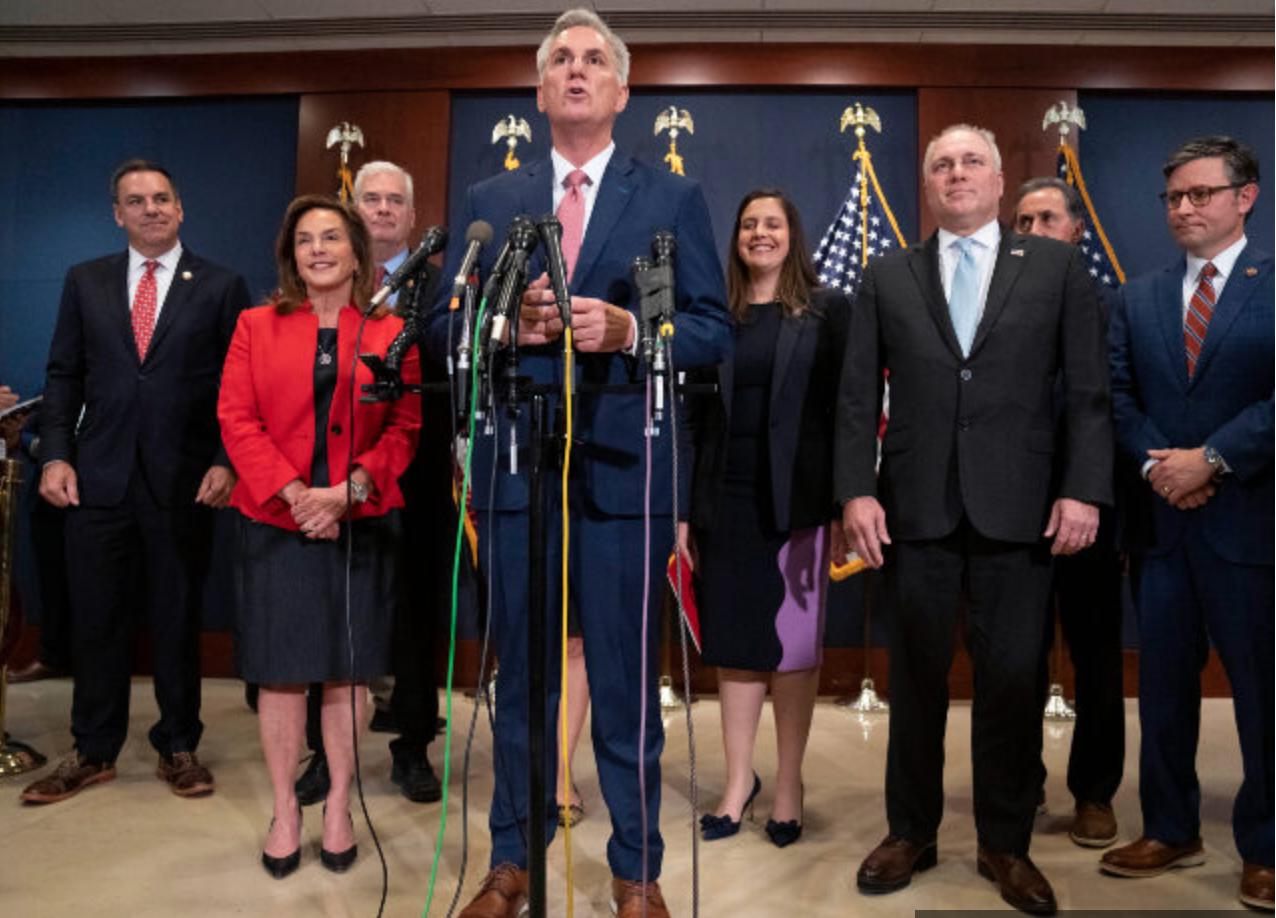 Look at photos of McCarthy surrounded by his “leadership team.”  Not ONE conservative in sight.  (Of course, leadership lapdog Richard Hudson is usually right there with McCarthy, smiling like a fool.)

Congressman Dan Bishop is standing strong with the Freedom Caucus in 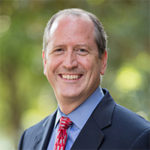 […]Bishop made it clear Tuesday morning that McCarthy shouldn’t expect his vote in a statement he posted to Twitter. “Kevin McCarthy is not the right candidate to be speaker,” Bishop tweeted. “He has perpetuated the Washington status quo that makes this body one of the most unsuccessful and unpopular institutions in this country.”

“This isn’t about personality differences or who has earned the position,” Bishop said. “It’s about serving the American people.”[…]

Bishop is the ONLY friend we in North Carolina have in Washington. Don’t forget that.

In all likelihood, there will eventually be a GOP-blessed speaker.  Like congressman Perry said, McCarthy had his chance, and blew it.  If you’re more likely to negotiate with Democrats than you are with actual platform-supporting conservatives in your own party, something is truly wrong.

7 thoughts on “Three strikes for McCarthy, but RINOs turn fire on conservatives”