The folks at George Mason U.’s Mercatus Center have come 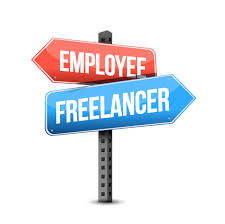 out with a pretty interesting study:

Are we becoming a nation of freelancers? Some fear that traditional employment is ending, a phenomenon perhaps driven by the rise of the sharing economy. Others have raised doubts that any changes are afoot in the labor market.

We report on new data received from the Internal Revenue Service that sheds light on the changes in independent contracting. Our data support the claim that there has been an increase in nontraditional employment, but the data refute the idea that this increase is caused by the sharing-economy firms that have arisen since 2008. Instead, we view the rise of sharing-economy firms as a response to a stagnant traditional labor sector and a product of the growing independent workforce. […]

In other words, the labor market out there stinks — thanks to bureaucratic meddling and ObamaCare.  More folks are striking out on their own to SURVIVE.

You can find all sorts of reports out there from the government, and other sources, claiming that self-employment is down AND that it is growing.  The authors of the Mercatus study suggest that evaluating the issuance of W-2 forms and 1099-MISC forms are a much more accurate measure of where things stand:

W-2 and 1099-MISC forms can help to illuminate the changing nature of work. W-2 forms provide a measure of activity within the traditional employment relationship. They are issued by the IRS for salaries and wages reported by employers for each employee. For individuals working multiple jobs, multiple W-2 forms are issued.

Among the 17 classifications of 1099 forms issued by the IRS, the 1099-MISC is the best measure for the growth in independent work. 1099-MISCs include reported income for individuals who have received between $600 and $20,000 outside the traditional employment relationship. This also includes individuals

who have taken part in fewer than 200 transactions with a single entity or within a particular platform. In the context of the sharing economy, 1099-MISC forms are issued for income reported by firms for each individual. As a result, individuals working through multiple platforms like Uber, Lyft, Airbnb, TaskRabbit, and Instacart will receive multiple 1099-MISC forms.

These new data show that changes in the labor market are indeed underway. They also place some important parameters on our interpretation of those changes and provide greater context for understanding the causes of the growth of the 1099 workforce.

First and most importantly, as shown in the indexed number of tax forms in figure 3, there has been a significant increase in the total number of 1099-MISC forms issued by the IRS in the last 15 years, around a 22 percent increase since 2000. During the same period, W-2 forms have stagnated, falling by around 3.5 percent.

And WHAT is behind all this? :

[…] Some have said the rise of the sharing economy is to blame for the recent increases in independent contractors. However, this narrative falls apart when it is held up against the available data. Uber, the largest of the new sharing-economy 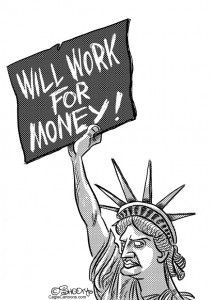 The sharing economy cannot be blamed for the increase in independent contractors. Instead, given the discrepancy in timing, the rise in the sharing economy should be viewed as a welcome response to more fundamental changes taking place in the labor markets. Using data from the Census Bureau’s Business Dynamics Statistics, Ryan Decker and his coauthors show that measures of traditional labor market dynamism have been falling for decades. As shown in figure 5, both the job creation rate and the job destruction rate have fallen—the former more steeply than the latter.

This falling dynamism, which long predates the rise of the sharing economy, presents new challenges for those seeking traditional employment. The long-term decrease in the rate at which new jobs are being created suggests that traditional employers are becoming more selective when it comes to hiring. The secular weakening in the labor market, indicated by the faster fall in job creation than job destruction, is also bad news for those looking for traditional jobs.