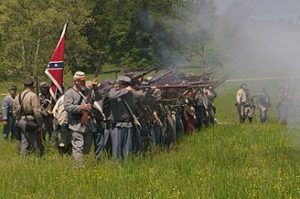 Dare to even possess a book that treats Robert E. Lee or Jefferson Davis fairly, and you will be pounded into smithereens  by the Bernie Sanders Fan Club and their comrades in the driveby media.

Republican legislators Mitch Setzer and Larry Pittman had the nerve to show up at a Sons of Confederate Veterans reception in Raleigh.  (The group has popped back up on the political radar to fight Roy Cooper’s jihad against Confederate statues.  *You know, those inanimate objects responsible for the explosive growth of the welfare state and all that murder and drugs in Durham, Charlotte, Fayetteville and Wilmington.*)

Of course, the dumpster-divers in the N&O newsroom ran across Facebook photos of Setzer and Pittman performing the despicable act and immediately started fanning the flames of outrage. 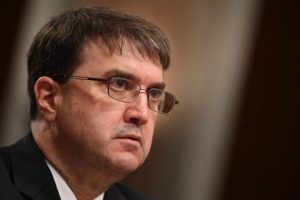 VA Secretary nominee Robert Wilkie is getting similar treatment from national leftists trying to derail his confirmation.  Full disclosure:  I know Wilkie from my time on Capitol Hill, and during his time as NCGOP executive director and a congressional candidate while I was a driveby here in NC.

On the Hill, folks who knew Wilkie the best jokingly referred to him as “Robert E. Lee” Wilkie due to his intense interest in Civil War history.  As he’s climbed the food chain in DC, Wilkie has been downplaying that interest — likely upon the advice of political handlers.

Wilkie is one of the smartest people I’ve known.  I’ve never seen or heard anything from him that could come close to being called racist.

It’s a shame that an interest in this country’s history can be portrayed as racism.  There are a lot of lessons to be learned from that four year period of conflict, as well as the years preceding and following it. 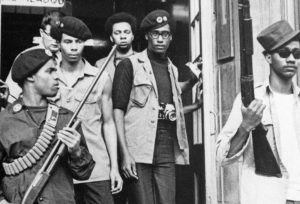 Meanwhile,  Bobby Rush continues to sit and serve as a member-in-good-standing of the US House Democrat caucus.  Rush was a leader of the radical Black Panther movement in the 1960s.  Liberals like to portray the Panthers as some sort of benevolent charity group — feeding and clothing the poor.

Yet, talk to military veterans serving at that time, and they can tell you of the Panthers teaming up with the Weather Underground (Obama buddy Bill Ayers’s group) to engage in guerrilla warfare against active duty US military personnel and installations IN THE UNITED STATES.

Snipers targeted troops in convoys moving along US highways.  Explosives were set off in the vicinity of military facilities.  I spoke to one veteran who served during that era who told me:

“I took more enemy fire in California than I did in Vietnam. It was surreal. You never imagined that happening in your own country.”

And one of the leaders of that mayhem is a Democrat congressman-in-good-standing.

Liberals like to bash Sons of Confederate Veterans members for celebrating “treason.”  Yet, the Black Panthers are celebrated by Democrats and one of their leaders is even allowed to represent the party in Congress.  Shooting at US troops 150 years ago on American soil is “treason,” but shooting at US troops FIFTY years ago on American soil is NOT?