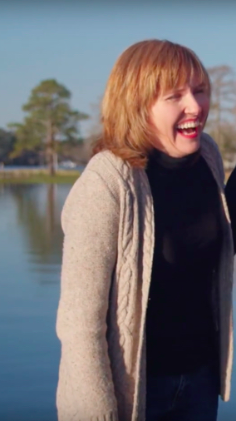 We told  you earlier about Judge Peter Mack down on the coast.

On December 19th, the next to last day of filing, Jennifer Dacey – wife to Indian casino lobbyist and failed congressional candidate Scott — filed to run AGAINST Mack The Knife RINO  in a Republican primary. 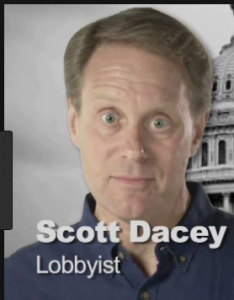 This had to come as a shock to most political insiders down east.  Although Mrs. Dacey has a law license,   she has little courtroom experience.  It’s doubtful many local folks KNEW she is an  attorney.

We’re told Mrs. Dacey went to a Republican Christmas party the night of her filing and told everyone she’s going to “Drain the Swamp” and take down this RINO judge Mack. 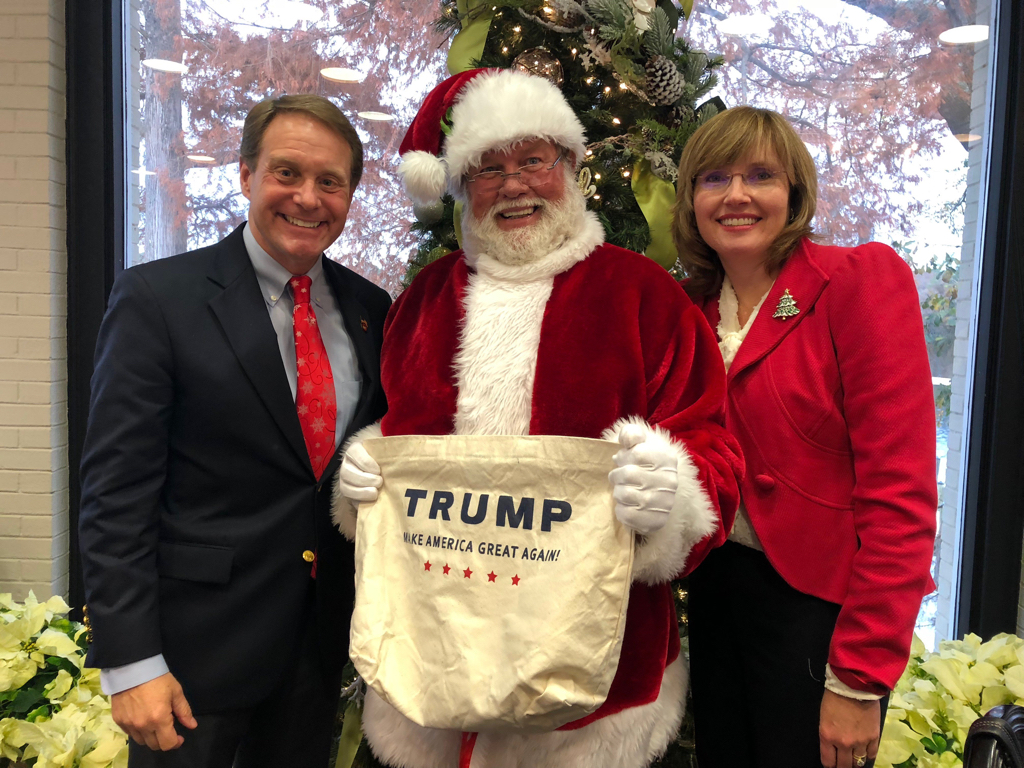 The next morning, December 20th at 6:36 am, Judge Peter Mack goes on Facebook and says he is running for re-election opposed by Dacey and needs everyone’s support.

Then, shortly before the noon deadline for filing to close, another player decides to enter the fray:  Andrew Wigmore.   This reportedly surprised most local political observers – EVEN Mrs.  Dacey.

So, as most  politicos took a  break for Christmas and New Year’s,  Mack The RINO decided to drop a bombshell.

On New Year’s Eve, Mack wrote on Facebook that,  because of physical ailments, he is going to retire in December 2020.  Although his name will be on the ballot, he says he will not actively campaign.

In less than a week he goes from asking for votes to saying he’s out.

In that same NYE Facebook post, Mack throws his support behind Jennifer Dacey.  The incumbent  RINO judge was now supporting the candidate who implied he was part of “The Swamp,” who brought his RINO ways to the forefront, even though she has little courtroom experience.

Maybe even more confusing is Jennifer Dacey gladly accepting the endorsement of a Trump hater and puts it front & center in her campaign literature.  Judge Mack is even escorting her around the courthouse introducing her to members of the legal community. (Remember, she is rarely there as a practicing attorney so this is an initial introduction for most.) 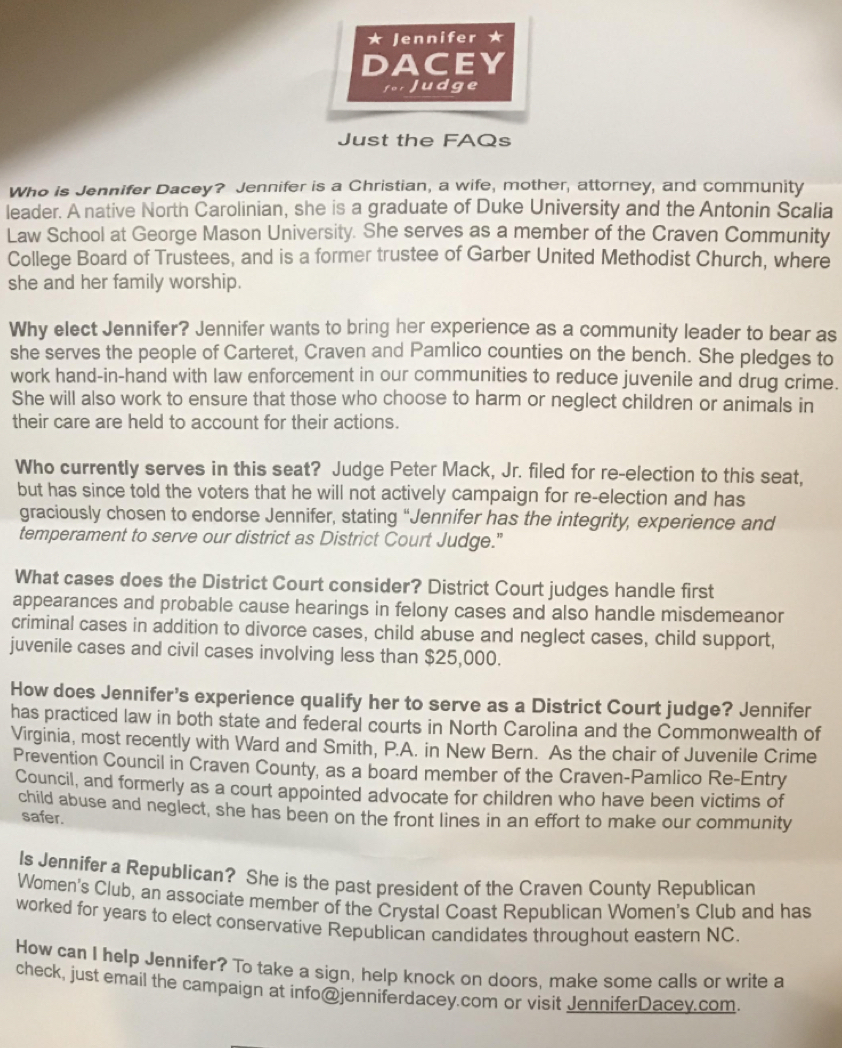 How is the local Republican base taking all of this?   Of course there’s a big contingent in that area that just don’t like the Daceys.  Jennifer was an active and very aggressive part of her husband Indian casino lobbyist Scott Dacey’s congressional campaign and last year’s Joan Perry campaign.

(You remember Joan Perry.  She’s the one who did an endorsement commercial for a Democrat. )

Stories about The Dacey Family’s method for dealing with Republicans who don’t see things their way are in plentiful supply.

There was the time hubby (and Indian casino lobbyist) Scott (reportedly) publicly confronted a Walter Jones campaign worker.    Jennifer got into a Facebook war during the last election when a Republican Women’s Club told her she was breaking club rules with her attacks.

The predominant reaction we’re getting from the legal community in that judicial district about the Dacey campaign?  Fear and anxiety.   Many are worried about what they see as Jennifer Dacey’s thin courtroom resume and how that could affect the work of the local courts.  Some of these folks (who happen to have  lots of courtroom experience) have gone as far as suggesting Jennifer Dacey is unqualified to serve as a judge.

Jennifer Dacey has addressed the issue of inexperience in recent campaign meetings. Specifically, she has cited a volunteer program  called Guardian Ad Litem.  It’s a great program that helps troubled kids, but you or I could volunteer to do what she did.

Other than that, Jennifer Dacey did research work for a few years for a law firm in New Bern.

Her latest response about her lack of experience came right out of her husbands failed congressional campaign:   “Donald Trump didn’t have any experience and look what a great job he’s doing”.

The problem with Jennifer Dacey’s Trump analogy is that Donald Trump’s lack of experience in politics was his biggest asset.   For years there has been a call for a more business-like approach to government and to have a President who had more of a background of a CEO.

Trump fit the bill.  He was just what a big portion of Americans were looking for.   I’m sorry, but anyone who understands how our legal system works wouldn’t want someone with little courtroom experience being a judge.

Years spent on the defense or prosecution side of the courtroom is where the career path to the judge’s bench passes through.   Being a judge is not the place for on the job training.

Dacey is sticking to the rhetoric, saying Trump is “Draining the Swamp” in Washington and she will “Drain the Swamp” in the courthouse.  This is a puzzling statement considering that is one of the most conservative judicial districts in the state. There are seated judges who regularly go to Tea Party and Taxpayer Association meetings. (They frequent this web site.)

Calling this legal community “the Swamp” just doesn’t pass the smell test.  Of course, the one glaring exception is RINO Judge Peter Mack.   Jennifer Dacey seems to use his name as much as Donald Trump.  Does this make any sense to you?  How does Jennifer Dacey think she is going to pull off this juggling act? Say one thing in front of the Tea Party, Say one thing in front of the Republicans, and another in the courthouse.

It all comes down to Andrew Wigmore to help voters in this region dodge a bullet.  I’m not sure that Wigmore has the financial resources to get his message out or whether that message will be effective enough to cut through the political clutter of a Presidential Election year.

Do you think the local newspapers in the area are going to do this kind of reporting on this race?  Don’t hold your breath.

It’s up to the good conservatives of that area to spread the word.   Otherwise,  you’re going to be trading in a RINO judge for a politico without the legal experience to do the job.

20 thoughts on “The Dacey Family Business: Run for SOMETHING. Hug up to Trump. (Repeat.)”