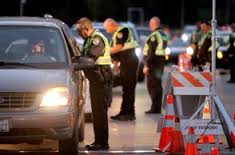 License checkpoints by local police officers are getting a lot of attention these days. We had an incident in Brunswick County where deputies reportedly fired into oncoming traffic at a license checkpoint.  A viral video from Murfreesboro, TN has raised some serious questions about drivers’ rights at checkpoints.

It’s always amazed me to see these license checkpoints going down at — say — 2 PM on a Saturday or Sunday.  (I’ve actually seen them on the way to church on Sunday morning.)  * I am sure the streets are crawling with drunk drivers at that time of day.*

If you dare to turn around and go the other way — upon seeing the checkpoint —  you’ve just given the officers probable cause to stop you and search your car.  Never mind the possibility that you may be running late for an appointment, and don’t have time to sit in line.

Don’t get me wrong.  I have a lot of friends in law enforcement, and am typically a huge cheerleader for those guys and gals.  But these checkpoints and the speed traps are deviations from real policing.  I’d much rather have a patrol car roaming the streets protecting Haymaker HQ from low-information Obama voters.

What’s behind this rise in license checkpoints?  Methinks it has something to do with The Governor’s Highway Safety Program.    The GHSP has a points system in place for local law enforcement.  Agencies are awarded points for holding checkpoints and handing out citations.  A system is in place to report this information to the GHSP.   The “points” are then tallied up.  Agencies get awarded grants, vehicles, and equipment based on the number of points they accrue in this competition.

Don’t go blaming Gov. Pat for this.  The GHSP is funded with federal money.  Every state has to set up something akin to the GHSP to distribute the federal money to law enforcement agencies within their jurisdictions.

One thought on “The backstory on those license checkpoints”