It’s local election time in many communities across the Carolinas.  The campaign signs are slowly starting to slowly litter the landscape once again.  The debate continues to rage about the usefulness / wisdom of deploying these things.  Putting 20 in a row along the side of a busy street is a waste of time and money.  A sign in someone’s yard is worth  more than its weight in gold.  It means that candidate has the vote of at least ONE of the residents of said domicile.  (The street corner or road shoulder can’t vote.)

As a 30 year watcher of campaigns, I like  to look at things like this.  This latest round of campaigns is not disappointing.  There are some good examples of sign design and sign placement.  And there are really bad design AND placement decisions.

What are the things you want a sign to cause voters to remember as they go to the polls?  The candidate’s name as they’ll see it on the ballot, the office being sought, and — sometimes — the party affiliation.

It’s highly unlikely that there will be more than one DeLancy on the ballot.   So, this works.  Jay’s last name — as it appears on the ballot — and the office he is seeking are highlighted.  (A candidate with a more common last name, like Smith or Johnson, might want to consider emphasizing both the first and last names.)

In my current travels, I’ve already seen one of my favorite candidates making what I call ‘The Mike McIntyre’ error.  McIntyre was a Democrat congressman from 1996-2014.  When he ran in 1996,  he bought a bunch of signs that said simply ‘I like Mike.’  It was a play on Dwight Eisenhower’s “I like Ike” slogan from 1952 and 1956.  Ike, at the time, was a universally recognized nickname for a man who had successfully led a world war.  In McIntyre’s case, people would see those signs and say: ” They like Mike, huh?  Mike WHO?  And what do they like about him?” 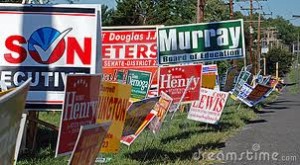 Someone in the know apparently got to McIntyre and persuaded him to change his signs.  And the rest is history.  Putting out a bunch of signs  that say “Jay for Mayor”  or “I like Jay” may seem kind of cool, but it’s doing little to nothing for you with the voters.  You’re making a HUGE assumption that everyone riding down the road knows WHICH Jay you’re referencing.  (Maybe you’re as famous and loved as Ike was, and people will flock to the first name.  But I doubt it.)

Family Matters.   I have a friend who ran for office a number of years back.  His late father was a beloved state legislator in the area my friend was running in. My friend was named after his dad, but went by his middle name.  I advised him to emphasize his FULL name on the ballot and on his campaign signs.  The small-font suffix at the end (Jr., III, IV, etc.)  emphasized that he was the son of the beloved but deceased legislator.

Another thought:  If people have to pull their car over and park, in order to read your signs, you have WASTED TIME AND MONEY.  Light-colored backgrounds and dark font colors are what you need.  (Of course, larger font sizes for the name and office being sought.)  If your sign can’t sell you in a split second glance from a passing car’s window, it’s wasted money.

One thought on “The ABCs of campaign signs”