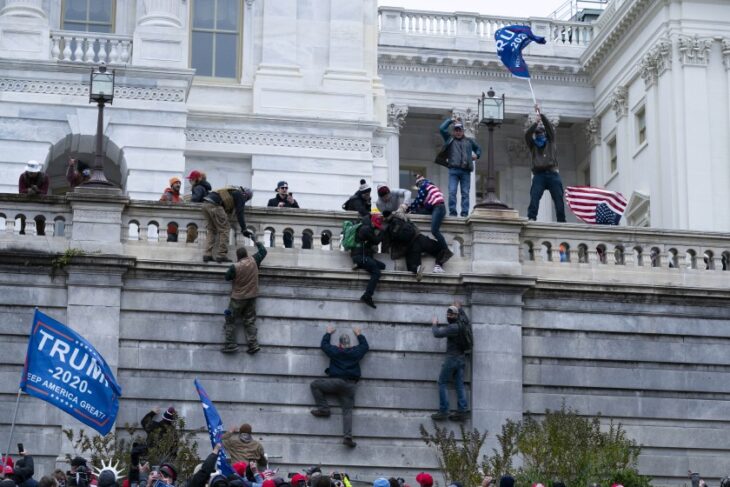 The Democrats and their media lapdogs are trying sooooooooo hard to sell us on the idea that Donald Trump and Madison Cawthorn incited violence and encouraged the violent breach of the US Capitol’s security.  The Washington Post,  of all people, has some more info that causes the Democrat / media spin on the episode crash and burn:

Self-styled militia members from Virginia, Ohio and other states made plans to storm the U.S. Capitol days in advance of the Jan. 6 attack, and then communicated in real time as they breached the building on opposite sides and talked about hunting for lawmakers, according to court documents filed Tuesday.
While authorities have charged more than 100 individuals in the riots, details in the new allegations against three U.S. military veterans offer a disturbing look at what they allegedly said to each other before, during and after the attack — statements that indicate a degree of preparation and determination to rush deep into the halls and tunnels of Congress to make “citizens’ arrests” of elected officials.
U.S. authorities charged an apparent leader of the Oath Keepers extremist group, Thomas Edward Caldwell, 66, of Berryville, Va., in the attack, alleging that the Navy veteran helped organize a ring of dozens who coordinated their movements as they “stormed the castle” to disrupt the electoral vote confirmation of President-elect Joe Biden’s victory.
“We have about 30-40 of us. We are sticking together and sticking to the plan,” co-defendant Jessica Watkins, 38, an Army veteran, said while the breach was underway, according to court documents.
“You are executing citizen’s arrest. Arrest this assembly, we have probable cause for acts of treason, election fraud,” a man replied, according to audio recordings of communications between Watkins and others during the incursion.
“We are in the main dome right now. We are rocking it. They are throwing grenades, they are fricking shooting people with paint balls. But we are in here,” a woman believed to be Watkins said, according to court documents.
A man then responds, “Get it, Jess,” adding, “This is … everything we f—— trained for!”
The FBI said it recovered the exchange from Zello, a push-to-talk, two-way radio phone app.
FBI charging papers against Caldwell, Watkins and a third man, former U.S. Marine Donovan Crowl, 50, allege that Caldwell and others coordinated in advance to disrupt Congress, scouted for lodging and recruited Oath Keepers members from North Carolina and like-minded groups from the Shenandoah Valley. The group claims thousands of members who assert the right to defy government orders they deem improper. The plotters both anticipated violence and continued to act in concert after the break-in, investigators alleged in court documents. FBI papers also say that Caldwell suggested a similar event at the local level after the attack, saying in a message, “Lets storm the capitol in Ohio. Tell me when!”
The three are charged with five federal counts of conspiracy against the United States; obstructing an official government proceeding; impeding or injuring government officers; destroying U.S. property, entering restricted grounds and disorderly conduct at the Capitol.
Attempts to reach attorneys of Caldwell, Watkins and Crowl have been unsuccessful. No one immediately responded to a messages left with numbers connected to Caldwell.
Watkins, of Woodstock, Ohio, told the Ohio Capital Journal last week that she formed a group known as the Ohio State Regular Militia in 2019, and that it had patrolled 12 protests to “protect people” on both sides. She said she had served a tour in Afghanistan while in the Army. She also said she was a member of the Oath Keepers.
“I didn’t commit a crime. I didn’t destroy anything. I didn’t wreck anything,” Watkins said to the Journal, adding that the riot was a peaceful protest that turned violent.
Crowl’s mother, Teresa Rowe, said she was appalled to see pictures of him in the Capitol. She said he had become radicalized after leaving the Marine Corps.
“I wish I could tell people what happened to him, but I don’t know,” Rowe said.
The arrests this weekend of several people with alleged ties to far-right extremist groups, including the Oath Keepers, the Proud Boys and the Three Percenters, suggest that the riot was not an entirely impulsive outburst of violence but an event instigated or exploited by organized groups. Hours of video posted on social media and pored over by investigators have focused on individuals in military-style gear moving together.
“This is the first step toward identifying and understanding that there was some type of concerted conspiracy here,” said one senior official with the U.S. Attorney’s Office for the District of Columbia, which is leading the investigation.

“Whether everyone else just happened to be there and got caught up in the moment, or if this is just the tip of the iceberg, how much this will grow at this point I can’t tell you, but we are continuing to investigate aggressively,” according to the official, who spoke on the condition of anonymity to discuss a pending investigation.
In charging papers, the FBI said that during the Capital riot, Caldwell received Facebook messages from unspecified senders updating him of the location of lawmakers. When he posted a one-word message, “Inside,” he received exhortations and directions describing tunnels, doors and hallways, the FBI said. […]

Some messages, according to the FBI, included, “Tom all legislators are down in the Tunnels 3 floors down,” and “Go through back house chamber doors facing N left down hallway down steps.” Another message read, “All members are in the tunnels under capital seal them in. Turn on gas,” the FBI added.
Other arrests Tuesday also underscored law enforcement’s concerns for threats to elected leaders, particularly because so many of the participants in the Jan. 6 chaos are still unidentified.
[…]
In Caldwell’s charging papers, the FBI said that it is reviewing communications between Caldwell “and other known and unknown Oath Keepers members.”
An FBI agent in court records said Caldwell helped organize a group of eight to 10 individuals led by Watkins. Members of the group are seen on video wearing helmets and military-style gear, and moving purposefully toward the top of the Capitol steps and leading the move against police lines, court records said.
A search of Watkins’s home in Ohio found numerous firearms, cellphones, pepper spray, a radio, a bag with a helmet and respirators, paintball guns, pool cues cut down to baton size and zip/cable ties, as well a camouflage hat and jackets, the FBI said.
The FBI said without elaboration that it also recovered a document titled, “Making Plastic Explosives from Bleach,” redacting the instructions in a photo exhibit.

According to a 23-page affidavit, Caldwell in Facebook messages said he scouted lodging for Watkins and others, starting at a Comfort Inn in Ballston, Va., about eight miles from the Capitol that “would allow us to go hunting at night if we wanted to.”

In an apparent reference to Oath Keepers founder Stewart Rhodes, Caldwell wrote Jan. 1, “I don’t know if Stewie has even gotten out his call to arms, but it’s a little friggin late. This is one we are doing on our own. We will link up with the north carolina crew.”
Meanwhile, the group was making contingency plans and focused on security, the FBI said. Caldwell said he would probably “do pre-strike on the 5th” and expected a man named Paul “will have the goodies in case things go bad and we need to get heavy.”
“Keep eyes on people with Red MAGA hats worn backward. Saw a report that they were going to infiltrate crowd tomorrow,” Crowl was warned Jan. 5 in another Facebook message, as he prepared for what he called an “Oathkeepers op,” court documents said.[…]

Wow.   Violent, extreme action being discussed and planned on Facebook.  Somebody should yank them OFF the Internet.
MORE:

“Thanks Brother, but we are WAY ahead on that. We have infiltrators in Their ranks. We are doing the W.H. in the am and early afternoon, rest up at the Hotel, then headed back out tomorrow night ‘tifa’ hunt’in. We expect good hunting,” the FBI said, in an apparent reference to antifa counter-demonstrators.
At some point on the day of the riot, Watkins posted to the social media site Parler a photograph of herself in uniform, writing: “Me before forcing entry into the Capitol Building. #stopthesteal #stormthecapitol #oathkeepers #ohiomilitia,” the FBI said. She added a photo of Crowl in paramilitary gear and an Oath Keepers patch as “one of my guys,” and the pair allegedly took a selfie in video recorded in the Capitol Rotunda, the FBI said
Caldwell also posted a message after the riot, court documents said: “Us storming the castle. Please share. … I am such an instigator!.”
“Proud boys scuffled with cops and drove them inside to hide. Breached the doors. One guy made it all the way to the house floor, another to Pelosi’s office. A good time,” Caldwell added, according to the FBI.
In a Jan. 8 message to Crowl, the FBI said Caldwell added, “We stormed the gates of corruption together (although on opposite sides of the building) so between that and our first meeting and getting to know you since I can say we will always be brothers!”

I’ve got more.  Are we still going to keep on with this Donald Trump / Madison Cawthorn nonsense?

3 thoughts on “The 1/6 Capitol “insurgency”: Planned DAYS & WEEKS in advance?”