I’ve been missing Jesse Helms.  I got to watch the man up close for nearly two years in DC.  The guy didn’t play the 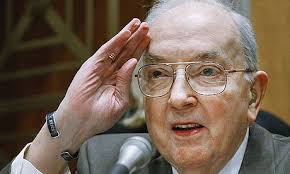 Washington game.  He called a spade a spade.  He didn’t mind being on the short-end of a 99-1 vote.  Helms spoke his mind.  He voted his conscience.  And the establishment hated his guts for it.

It’s been depressing to see what the NCGOP has been sending to Washington since the man from Monroe retired.  We’ve got a senior senator who Democrats appear to be so comfortable with that they’re not going to even run against him. We’ve got a junior senator who is a cash-vacuum — changing up his positions based on who gets the last check into his hands.

Senator Ted Cruz of Texas has been giving me some hope for the future of the Senate and our country.  He’s been carrying on the spirit of old-school Helms — telling it like it is, and tinkling in the punch bowl when it needs to be done.

Cruz went on with El Rushbo on Friday and built on what he started on the Senate floor:

CRUZ:  Well, Rush, it’s great to be back with you.  Today the Senate took up the Export-Import Bank, a classic example of cronyism and corporate welfare.  The leader of Senate Republicans, Mitch McConnell, went to the floor and demonstrated that he had lied both to the American people and also to every Republican senator, including me.  Back when we were having the fight over trade promotion authority, I asked Mitch McConnell directly if he had cut a deal to reauthorize this cronyism and corporate welfare in order to try to get the votes, and he looked at me, he looked at all 54 Republican senators, and he said flat-out, “There is no deal. There is no deal. There is no deal.”

CRUZ:  Exactly right.  That’s part of how Republican leadership got the votes for TPA is by promising to put taxpayers on the hook for hundreds of billions of dollars of loan guarantees that go primarily to a handful of giant corporations.  And it’s what I refer to as a Washington cartel.  It’s career politicians in both parties who get in bed with lobbyists and special interests.  It’s why we’re bankrupting our kids and grandkids.  And what’s striking — I mean, Rush, people are so frustrated, ’cause we keep winning elections, and then our leaders don’t do a darn thing they said they were going to do.  So we were told in the House of Representatives things will be different.

In 2010, the people rose up, we got a Republican majority.  And they haven’t done much of anything.  Then we were told we just need a Republican majority in the Senate, retire Harry Reid.  In 2014, millions of Americans stood up to do that.  For six months we’ve had a Republican majority.  What have they done?  They passed a trillion-dollar Cromnibus plan filled with corporate pork and corporate welfare.  We funded Obamacare and President Obama’s executive amnesty, and Republican leadership jammed through the confirmation of Loretta Lynch as attorney general.  Every one of those is exactly the same as what Harry Reid would have done.  And it’s why people are frustrated.

Why is it that Republican leadership, authorities as Harry Reid and the Democrats — and the answer is the lobbyists and special interests, the giant corporations that want Big Government and power.  They give campaign contributions to both Republicans and Democrats.  And today I called out the majority leader for looking 54 Republicans in the eye and telling a flat-out lie.  It was a very unfortunate day for the Senate.  It’s not a good day when the majority leader is willing to lie to the members of the Senate.

CRUZ:  It’s complete fiction.  He wants a show vote on repealing Obamacare.  Now, of course back in October 2013 when Mike Lee and I were leading the fight to defund Obamacare, then Mitch McConnell joined with Harry Reid in leading the fight to preserve Obamacare.  So when it actually has teeth, leadership wasn’t with us.  But they do want an empty show vote.  And, you know, Rush, as you know, a couple of weeks ago I came out with a new book, A Time for Truth, and the entire point of the book is to tell the truth about what is happening behind closed doors, and, in particular, how career politicians in both parties are not telling the truth to the American people.  And this was an example of that.  And, unfortunately, it’s why we see so many campaign conservatives that pretend to be conservative on the campaign trail but they don’t govern according to what they promised us on the campaign trail.

CRUZ:  So the Export-Import Bank was created by Franklin Delano Roosevelt. And it puts American taxpayers on the hook for hundreds of billions of dollars in loan guarantees.  Most of these loan guarantees go to foreign companies in China and Russia and even in some instances doing business in Iran, and they expose taxpayers and they enrich a handful of giant corporations.  Boeing is the single largest recipient.  Now, on an earnings call just recently the CEO of Boeing said, you know, without the Export-Import Bank, we’ll be fine, there’s plenty of loans. We can get credit in the private market, but it’s easier, it’s cheaper to write campaign contributions to the Washington cartel and get them to raid the taxpayers, that’s easier and cheaper, and it’s what’s fundamentally corrupt about Washington, and it’s both parties.

You know, right after Mitch McConnell did this, Harry Reid tweeted out a tweet celebrating Mitch McConnell for reauthorizing or leading the fight to reauthorize this corporate welfare and cronyism.  But one, all of the Democrats who rail against Big Business who put on populist rhetoric, this shows at the end of the they’re just interested in the same campaign contributions everyone else is.  And every Republican who says he or she believes in free market principles, at the end of the day it is about power and money and Washington, and the people getting left behind are working men and women. […]

CRUZ: […Y]ou know, it’s interesting, there were a bunch of other amendments that I had introduced, that other senators had introduced, for example, an amendment to defund Planned Parenthood.

We’ve seen the shocking, horrible videos.  Mitch McConnell billed the amendment, (unintelligible) which is the exact same procedural abuse of power Harry Reid used to do, to defund Planned Parenthood. An amendment to stop sanctuary cities, that was another amendment, cut off federal funds to sanctuary cities. Well, Mitch McConnell billed the amendment tree to prevent any vote on sanctuary cities.  The priority of leadership is what the lobbyists and giant corporations and special interests in Washington want.  It’s why we’re bankrupting our kids and grandkids.

CRUZ:  Well, it’s interesting.  The local Chambers of Commerce, the small business people usually are [Republican], but the national chamber is just a giant lobbying arm for Big Government handouts to Big Business. And so they are essentially promising to create the crony caucus.  Everyone who is in favor of corporate welfare — you know, how is any conservative supposed to credibly take on welfare reform if we’re not willing to stop shoveling billions of dollars to giant corporations?  We need to show some consistency here, and people are understandably frustrated because you don’t see people willing to take on the Washington cartel.

[…]RUSH:  And they see all these corporate entities that they used to think held the same values apparently don’t care while the country is circling the drain, none of that matters to anybody in Washington.  That’s the disconnect.

CRUZ:  Right.  And we have seen before how to defeat the Washington cartel, which in 1980 the Reagan revolution came from the American people.  Remember, Reagan, a lot of people forget, he took on the Washington cartel.  He primaried Gerald Ford.  You want to tick off Republican leadership, come within an inch of defeating the incumbent Republican president.  The Reagan revolution came from the grassroots.  […] And I believe 2016 is gonna be an election like 1980, that we’re gonna win by painting in bold colors and not pale pastels.

I don’t know about y’all, but this guy is looking PRETTY GOOD.