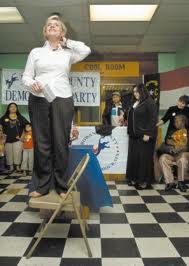 The Wake County GOP chairman’s description of Boss Bev as ‘dumb’,  and Pat McCrory’s subsequent tossing of said chairman under the bus for said comment, has received some national attention thanks to a Daily Caller column by Fred Eckert, a former congressman and ambassador now retired in the Raleigh area:

If North Carolina Governor Bev Perdue is not America’s dumbest governor, a whole lot of us here in the Tar Heel State would be very surprised.

And why is it that so many Republican candidates are so wimpy and foolish as to meekly fall in line when Democrats and their accomplices in the media demand that they denounce any fellow Republicans who dare treat a Democrat office holder in any way similar to how Democrats routinely treat Republican elected officials?

That’s what I’m left wondering as I observe the media’s latest effort to try to turn an insignificant little matter into some brouhaha.

The other evening during a precinct organizational meeting in Raleigh, Wake County Republican Party Chairwoman Susan Bryant happened to remark that liberal Democrat Governor Bev Perdue is “the dumbest governor in America.”

Feigning shock and outrage, a spokesperson for Governor Perdue demanded that the leading Republican candidate for governor, Pat McCrory, in effect apologize for what Chairwoman Bryant had said, whereupon, treating the wishes of liberal Democrats as their command, the media promptly put the demand to McCrory, who took the bait and declared that he did not “agree with or condone those comments.”

Don’t Republicans ever learn? Rather than grant Democrats their wish by directing his fire at a Republican country leader for expressing such a widely held view, all McCrory had to do was decline to comment on the grounds that these were Susan Bryant’s remarks, not his. He should have added that he will begin commenting to the media about what other Republicans say about Perdue or any other Democrat when the media drop their double standard and begin demanding that Democrats speak out against things other Democrats say about Republicans.

McCrory let the Democrats and their media accomplices get away with propagandizing the notion that it is okay to call Republicans dumb or worse — think of what they’ve said about Dan Quayle, George W. Bush, Sarah Palin, Michele Bachmann, etc. — but thou must not say that a Democrat best known for doing something really dumb is dumb.

Eckert takes the opportunity to give kudos to Chairman Bryant:

Were the roles reversed here and some Democrat had called some leading Republican dumb, you just know that the Democrats and the media would make note of the fact that in his statement demanding disavowal of the “dumbest governor” remark, the spokesman did not dispute its accuracy but merely expressed annoyance with its having been said — and we’d be asked to name any governor we think is dumber.

So hats off to County Chairwoman Susan Bryant for not wimping out and instead responding to the Democrats and media by telling them, nicely, to kiss off, in effect reminding them of that great line from the movie “Forrest Gump”: “Stupid is as stupid does.”

Eckert recounts the whole brouhaha over Perdue’s “suspend the elections” comments that made our state a national laughingstock  (you know, before the whole chicken nugget thing in that Hoke County school).  He points out how The Constitution — which she swore to uphold and defend — calls for congressional elections every two years.  The mainstream media accepted Bev’s lame excuse that she was kidding — even though they had tape suggesting otherwise — and moved on.

Eckert is critical of McCrory and his campaign for not showing as much cojones as Bryant did:

Republican gubernatorial candidate Pat McCrory was politically dumb to let the Democrats and the media sucker him into proclaiming that the “stupid is as stupid does” rule should not apply to Democrats. Let’s hope other Republican candidates wise up and learn from McCrory’s foolish, wimpy mistake.