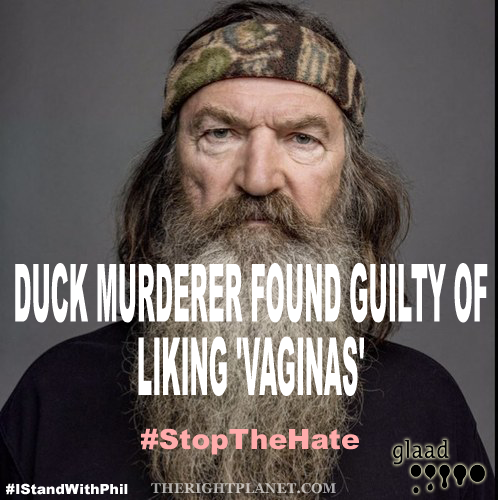 The drama over the hit reality show “Ducky Dynasty” seems to be on the tip of everyone’s tongue.  (Somebody’s PR flack has certainly earned their Christmas bonus this year.)

I’ve heard from a lot of right-leaning, right-thinking folks seriously promoting a boycott of A&E. They’re simply not going to watch the network anymore.  Well,  John Nolte, a NC-based columnist for Breitbart, has an interesting point about that strategy:

For reasons of my own, I neither participate in, encourage, or organize boycotts. This piece isn’t about that. The A&E boycottover the suspension of “Duck Dynasty” star Phil Robertson for expressing his Christian beliefs does, however, give me the opportunity to talk about a subject near and dear to my heart, which is the legal tyranny of bundled cable that means that any boycott against A&E  will have little to no effect.

If you are wondering why low-rated cable television shows and networks not only stay alive but also manage to be profitable, it is due to the bundled cable racket that forces over a hundred million Americans to pay for dozens of channels they don’t like and/or watch. For example, if you want Fox News but have to get CNN and MSNBC in the package, chances are very good that CNN and MSNBC are getting a chunk of your cable bill.

Yep, that is right. This racket has been so perfected that not only is failure rewarded, the networks can pretty much broadcast whatever they like because ratings don’t matter all that much. And when you have 100 channels owned by a half-dozen or so multi-nationals, they are also pretty much boycott proof.

It is a simple and sad fact that America is already not-watching CNN, MSNBC, Jon Stewart, and others,  but they still have an impact because Big Entertainment makes billions from bundled cable and can therefore afford to keep them on the air. The left-wing monopoly on our culture is subsidized not by popular acclaim but by bundled cable.

This means that boycotting or not-watching A&E is not going to matter a whole lot to A&E.

If you want to really hurt A&E, you are forced to go to the extreme of canceling the entire cable package that comes with A&E, and that could mean losing channels you do like and want to support. It might even mean cutting the cord entirely and having no cable television. And if you do cancel your cable, be sure to tell them why, because a lot of people are cutting the cord these days.

Things aren’t as bad as they used to be. There are now alternatives to cable like Netflix Streaming, Amazon prime, home video, etc. But not everything you might like is on there.

Don’t get me wrong, these networks and multi-nationals would prefer more viewers than fewer but…

Can A&E afford to alienate all eleven million “Duck Dynasty” viewers by punishing a Christian for expressing Christianity?

Bundled cable is the root of too many political and cultural evils to count.

If the A&E-DD fiasco has you hot under the collar, start pressuring your folks on Capitol Hill to dump bundled cable and allow for à-la-cárte.  Express your disappointment about the A&E decision to A&E advertisers.  The advertisers AND the network — despite their liberal bent — are primarily concerned with making a dollar and keeping customers happy.  A&E acted because they were afraid too many viewers would be turned off by ol’ Phil’s comments.  Demonstrate that Phil fans vastly outnumber the GLAAD stormtroopers.

Cutting the cord on your cable TV is also an attractive option.  I did it two years ago.  There are a lot of great options out there on the Internet — Hulu, Amazon Prime, Netflix, The Blaze, among others – that give me what I want for a lot less money. A lot of the networks have free apps for tablets that allow you to watch their shows for free.  I save $$$ and get to choose what comes into my home.

Cable companies are losing a lot of customers like this these days. Have you see the hard-sell commercials and ads out there these days?  Time Warner is offering low introductory deals and giving away the latest Samsung tablet in exchange for signing up with them. Would they be doing that if things were going well?