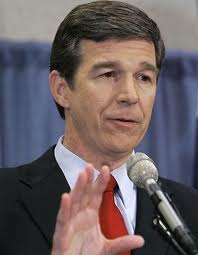 2012 is supposed to be a boon year for North Carolina Republicans — landing the Governor and Lt. Governor seats for the first time since 1988, as well as  a number of other council of state seats.  Unfortunately, the post of attorney general, one of the most powerful jobs — if not THE most powerful job — in state government was left uncontested by Republicans this year.

The attorney general supervises the State Bureau of Investigation — which assists ALL murder and police shooting case in the state. It also handles ALL crime lab work for every law enforcement agency in the state.   The AG represents the state in court, and has a big say on whether political corruption probes move forward or not.  That’s heavy stuff.

Straw polls indicated US attorney George Holding, amidst the glory of the Easley and Edwards probes, could have wiped the floor with incumbent Roy Cooper.  But, he passed on the opportunity for the greener pastures of Congress.

You have to be an attorney to hold the AG office.  Most of the best-connected attorneys in the state are Democrat loyalists.  So, the pool of conservative bar members is small to start off with.

But given the state of the political environment, the GOP SHOULD have stuck a body in that race.  Sure, Cooper got some major props for his decision about Mike Nifong in the Duke lacrosse case.  But he only jumped in after public outcry and media scrutiny became too great to ignore.  But look at today’s headlines.  The state crime lab is reportedly a mess, and it could cause prosecutors all over the state some SERIOUS headaches:

A year and a half ago, in the face of mounting criticism, State Bureau of Investigation leaders vowed that the agency’s forensic crime laboratory would employ the best and brightest analysts and get them nationally certified in their specialty.

Over the last year, SBI leaders worked hard to deliver. But a problem surfaced this month: About 25 analysts failed those certification exams, results that SBI leaders say they accidentally kept a secret.

Now, SBI leaders are resisting handing over the information, saying the test results are private personnel records and can only be turned over with a court order.

District attorneys say they were blindsided and must now revisit hundreds if not thousands of old cases since December that were handled by analysts who failed the exam.

“It makes it look like we’re hiding stuff,” said Ben David, New Hanover County District Attorney and incoming president for the N.C. Conference of District Attorneys. “We have to live in sunshine as much as possible. Recent history should have made all of us more sensitive to this.”

The SBI was embroiled in scandal two years ago after an auditor found that hundreds of old blood examinations were incorrectly reported. The N&O reported widespread issues at the SBI, including policies and practices that showed bias for the prosecution.

Legislators demanded swift reforms. Attorney General Roy Cooper changed the agency’s leadership, suspended a unit that examined blood patterns and formed an advisory board of nationally reputed scientists. Among the changes legislators demanded: all SBI lab analysts must be certified in their discipline if a test is available.

Compliance was tricky for analysts who handle DNA tests, blood alcohol and drug tests or who analyze trace evidence such as fiber transfers – there is no national certification specific to those disciplines. Joseph John, the crime lab chief, hired the American Board of Criminalistics to administer tests to these analysts last December.

The majority of the questions centered on the analyst’s discipline, but the rest of the test included questions from other disciplines. The analysts were told the scope of the test and urged to prepare, John said.

“We certainly anticipated and expected that most of our analysts would successfully achieve certification,” John said.

SBI leaders contend these tests results are private personnel information, and if the attorneys want it, a judge must order them to hand it over. Prosecutors and defense attorneys say the SBI leaders’ interpretation is ludicrous. Several Supreme Court decisions uphold defendants’ right to any evidence that could help their case, and specifically have to any information that could impeach a witness against them.

“It’s absolutely discovery and they are entitled to it,” said David, the DA president. “Whatever legal advice [the SBI is] relying on fails to account for the environment we find ourselves in.”

The standoff between prosecutors and the SBI is intensified by what John says was an innocent mistake on his part. The lab director says he attempted to alert district attorneys in January about the high failure rate. He wrote a letter but never sent it.

Last Friday, several district attorneys confronted SBI leaders in a meeting described as tense. On Tuesday, Buncombe County District Attorney Ronald Moore filed a motion demanding SBI leaders be called to court to explain the situation and hand over the records. In a sharply worded motion, Moore calls the SBI’s refusal to voluntarily turn over the failure notices “illegal.” A hearing is scheduled June 26.

John sent an apology letter to district attorneys Wednesday, saying it was an accident and that he took full responsibility.

Cooper, who supervises the SBI, said in a statement that the bureau is going beyond what is necessary with the certification tests: “We believe North Carolina is the only state in the country to require this additional test for crime lab analysts and I’m proud of the work they do helping to solve crimes and exonerate innocent suspects.”

Earlier this month, Smithfield defense lawyer Michael Reece asked the prosecutor and the SBI for any records regarding certifications for the analysts who handled DNA testing in a drug trafficking case scheduled for trial this summer.

A judge ordered the SBI to provide the test results. Reece was stunned by the results. Both analysts – including one supervisor – in his case had failed the certification exam.

When he looked more closely, Reece noticed that the second page of the exam results was missing. That page included information from the examiner about the areas the analyst needed to work on before retaking the test.

On Monday, a judge ordered the SBI to turn over the supplemental page. Reece has filed a motion asking that examinations by those SBI analysts be barred from the trial.

John, the crime lab chief, said lab administrators don’t have those supplemental pages for the analysts who failed. John said the organization administering the tests provided results directly to the analyst. John then asked analysts to provide the results for their personnel files.

John says he doesn’t know how many analysts failed because of incorrect answers in their discipline or outside of it. John said people shouldn’t assume that a failure on this exam means the analyst is unqualified to work and to testify in cases.

“It appears to be a leap that people assume being uncertified means unqualified,” John said.

On Thursday in Forsyth County, Superior Court Judge Ronald Spivey ordered the SBI to turn over a list of analysts who failed the exam to the district attorney in Winston-Salem. The judge directed the prosecutor to share any potentially exculpatory evidence with defense attorneys.

John said the SBI will comply. He expects similar orders in other districts soon.

One thought on “Roy Cooper: Talk about a missed opportunity”