THAT is what it sounds like when you take in the latest comments from King RINO himself, Mitch McConnell:

[…] Republican Senate Minority Leader Mitch McConnell raised doubts this week that Republicans will take control of the Senate and pointed to the “quality” of some of the candidates as the reason.

“I think there’s probably a greater likelihood the House flips than the Senate,” the minority leader anticipated. “Senate races are just different, they’re statewide. Candidate quality has a lot to do with the outcome.”[…]

(Thom Tilli$$$ is nodding his head vehemently in agreement.)

Translation: Too many “right-wing wackos” are winning primaries over our more sensible folks.

*That’s nice.*  Defeatist attitude and rhetoric from the alleged party leader in the Senate.  We get lectured all the time by these people when conservative candidates come up short in primaries against RINOs.  We need to be team players, we’re told.  Think about the good of the party and the country, we’re told. 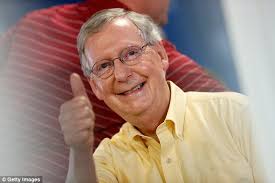 But when one of OURS beats one of theirs?  No dice.  They either sit out or run an independent candidate or just badmouth the conservative nominee. In 1964,  there were “Republicans for Johnson” — RINOs mad about Goldwater.  In 1980, they ran RINO John Anderson as an independent in the general election against Carter and Reagan. Look at all the badmouthing of Trump in 2016 and 2020.

Dan Forest’s 2020 campaign for governor was one of the ugliest, most incompetent spectacles I’ve ever seen.  (Almost as bad as Hayes for Governor in 1996.) But I am convinced he got knifed in the back by quite a few RINOs.  (As did Hayes in 1996.)

I don’t know about you, but I’m done playing nice with people who don’t like or respect me.  To them, it’s all about the ‘R’, and very little about conservatism.

‘R’ is just another letter in the alphabet.  These people would rather scoop all of the meaning out of the party, and just have the ‘R’ crowd and the ‘D’ crowd operate like social clubs, like Rotary and Kiwanis.

If you stand for nothing, you’ll fall for everything.