Renee Ellmers is not raising any money.  And that’s mostly what her RINO friends in Wake and Harnett counties care about.  It appears the David Lewis machine is gravitating rapidly toward former Lewis aide, current solar lobbyist, and failed RNC committeeman candidate Greg Gebhardt.

Here’s the invite to Gebhardt’s political coming-out party.  Just count the number of big spending Rs who lost in 2018, and other David Lewis acolytes.  (Hey!  Isn’t that the lovely and uber-pleasant Ma Cotten?  Tormenter of Hasan Harnett and defender of Dallas Woodhouse and Robin Hayes?) : 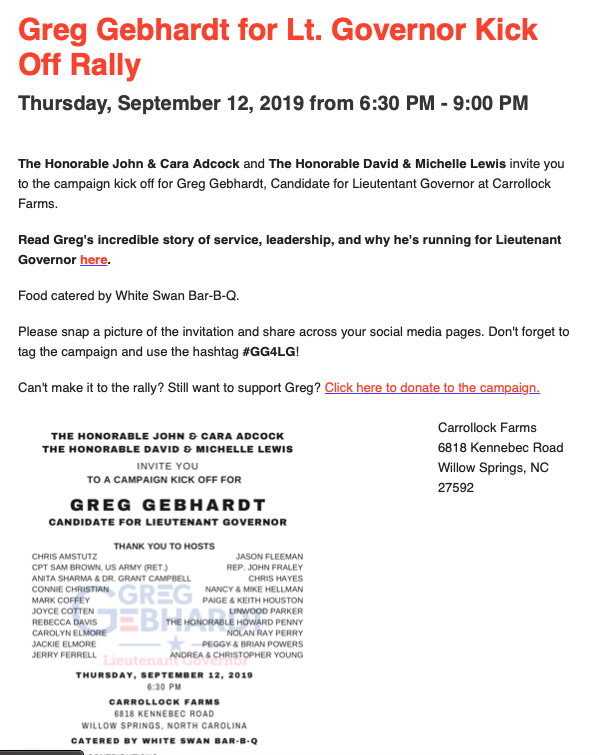 Turning the Lt. Governor’s office over to the Harnett mafia and the solar goons, after eight years of distinguished service by a class act like Dan Forest, would be a travesty.  There are a lot of people who have announced for the office, but few appear to have the substantial backing Gebhardt appears to have.  It’s also pretty clear that there aren’t any serious, credible options out there right now  for conservatives to consider for lieutenant governor.

There’s time, but not much.  This Gebhardt guy is a swamp creature who will guarantee a windfall for special interests and other swamp creatures if he manages to get into office in 2020.