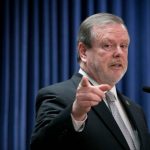 Moore Republican Women is very unhappy with the intrusion

of the North Carolina Senatorial Committee in our redistricted

We have two members (Tom McInnis and Michelle Lexo)

running against each other. The use of the frank (reduced

cost mailing) of the North Carolina Senatorial Committee is a

de facto endorsement of one candidate over another.

We, as a unified club, resent this meddling into our decision

making. It is an infringement on our rights as “of the people,

By use of the frank, an unfair financial and psychological

advantage is given to one candidate.

The statement appeared in the May edition of the group’s newsletter.  The newsletter also featured THIS piece of unsigned “poetry”:

when all thro’ Moore County,

a trio were working,

toward a Senate seat bounty.

touting talents of all,

“some” paid by GOP bossies.

When what to our wondering eyes should appear,

but nifty campaign signs on roads far and near.

signs were removed; the rest intact.

I don’t know about you.  But I would hazard a guess that these ladies are a wee bit upset.