Of course, we’re having to hear about this outside of the drive-by media:

According to a story in The Christian Times, who they claim verified with The Charlotte Observer, Keith Lamont Scott had a two decades long history of gun violence, including an arrest/conviction for shooting at police officers in Texas.   The New York Times has previously reported on his troubled past but not the 2005 shooting at police incident:

(Via NYT) […] According to court records, Mr. Scott was born in South Carolina, was about six feet tall and weighed 230 to 250 pounds. While living in South Carolina in the 1990s, he was charged with a number of offenses including check fraud, aggravated assault and carrying a concealed weapon. Later, he moved to Texas where he shot and wounded a man in San Antonio in 2002, for which he was convicted and sentenced, in 2005, to seven years in prison. He was released in 2011. (link)

The Charlotte Observer also reported on Scott’s extensive criminal career –SEE HERE– and we did independently identify a criminal record in Texas – SEE HERE – which aligns with all of these reports.

(Via Christian Times) Keith Scott had a long police record that included gun violations. Christian Times Newspaper has learned,and it has been confirmed by the Charlotte Observer, that Scott was convicted in April 2004 of a misdemeanor assault with a deadly weapon charge in Mecklenburg County, and other charges were dismissed: including felony assault with a deadly weapon with intent to kill, assault on a female, and communicating threats.  Scott was also charged with assault with intent to kill in 1995.  [ Texas Arrest Record Here ]

The most shocking find in Scott’s record, however, is what occurred in Bexar County, Texas in 2005.  In March of that year, Scott was sentenced to 15 months in state prison for evading arrest, and in July, he was consecutively sentenced to seven years on a conviction of aggravated assault with a deadly weapon.

Sources are now coming forward and alleging that those two separate convictions are in fact related, and they both have to do with a confrontation between Scott and Bexar County Police in early 2005.

One source, who asked CTN to refrain from using her name to protect her identity, told reporters that Scott fired a handgun at San Antonio police officers when they attempted to detain him in February 2005 after noticing that he was driving erratically.  (Scott had a history of drunk driving, according to court records).

Allegedly, as the officers approached Scott’s black Ford sedan, he fired two rounds from the driver’s seat and then sped away.  Neither of the officers was hit, and they proceeded to give chase and detain Scott several blocks away.

While Scott did leave the gun in his passenger’s seat when he attempted to run on-foot, he did, according to our source, assault one officer by punching him in the face.

[…]   If accurate, those reports when combined with the eye witness who took pictures of the handgun dropped by Keith Scott when shot by police officers (see […] below), the account of the Charlotte police department appears to be validated. 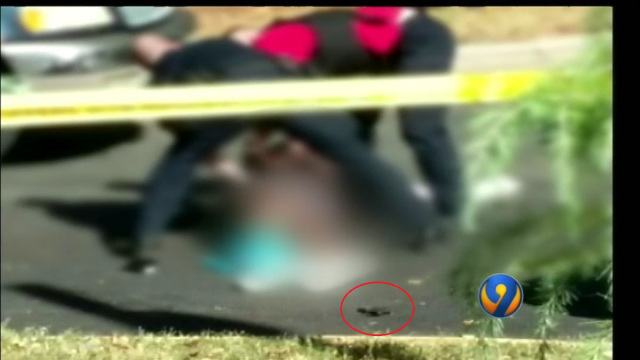 12 thoughts on “Report: Man shot by Charlotte police had prior record of SHOOTING AT POLICE”