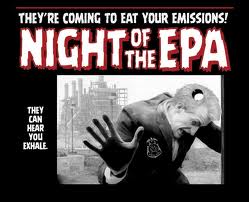 Nothing coming out of Washington surprises me anymore.  Thanks to our thrice weekly Pulitzer Prize winning local paper here in Moore County,  I learned that the EPA punishes businesses if the exhaust from their operations blows across state lines.  Seriously?

Should an industrialist in southern Virginia hire employees to stand along the NC state line and huff-and-puff all day to blow the smoke BACK into Virginia? How much more asinine can you get than to demand businesses take responsibility for the actions of Mother Nature ???  No wonder so many manufacturers are packing up and moving offshore to escape the tyranny of Washington.

As expected, our local paper let their Pulitzer go to their head, and endorsed this bit of mind-blowing insanity:

Though many areas of North Carolina depend on tourism to keep their economies healthy, Moore County is a special case in that regard.

That’s why local folks take — or should take — special interest in a vote that took place in Washington the other day. In it, the U.S. Senate rightly rejected a bill that would have had the effect of blocking the Environmental Protection Agency from enforcing rules holding states responsible for toxic emissions from coal-fired power plants that blow into other states.

It was Sen. Rand Paul, R-Ky. (son of Republican presidential candidate Rep. Ron Paul) who pushed the bill to block enforcement of the EPA’s existing cross-state rule, which will require plants in 27 states to work to cut power plant emissions that cross state lines.

North Carolina, which has made much progress toward cleaning up its pollution act in the past 10 years, would appear to have much to gain and little to lose from the rule that Paul tried to scrap. After all, the climatic reality is that we are downwind from polluting plants in states like Kentucky, Tennessee and Alabama. But under normal conditions, we’re not upwind of any other states, since most of the remaining pollution we produce blows out to sea.

For that reason, it is not surprising that Sen. Kay Hagan (D-N.C.) voted against the proposal to junk the EPA rule. But it is worth noting that Sen. Richard Burr (R-N.C.) voted in favor of the Rand proposal, opening himself to accusations that he put his own deregulatory ideological spin ahead of his home state’s welfare.

Even Republican Sen. Lamar Alexander of Tennessee voted — along with five other GOP senators — in the majority against blocking the interstate rule.

We liked his justification.

“The only reason for this bill is a political message,” he said. “And what kind of message is it? That we favor dirty air blowing from Kentucky into Tennessee. … People come to see the Great Smoky Mountains, not the Great Smoggy Mountains.”

I wish I could collect fines for all of the HOT AIR expelled by know-nothing politicians and editorial writers.  I’d be filthy STINKING rich.