Mecklenburg County was the site of one of the worst electoral blowouts in the state for the GOP.  (Hell, the county GOP 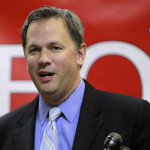 probably qualifies for FEMA funding.)  State senator Dan Bishop was the most significant elected Republican left standing after the votes were counted in Mecklenburg County in November.

In  the real world,  folks in charge of a disastrous performance resign in shame or are fired.  In politics and government  – and especially with the GOP, it seems — those folks get rewarded with MORE job security.

We told you earlier about Mecklenburg County GOPers being wooed with free office space from a company owned by a close ally of the Lt. Governor.

In a move that doesn’t appear to bode well for folks seeking wholesale change in state GOP leadership,  Mecklenburg County Republicans held their convention today and reelected the whole slate of local leaders who presided over November’s disaster.  Every last one of them.

Though, we learned about some extra details that probably factored into that happening.   Charlotte businessman David Longo has been identified in  media reports as a close friend of Lt. Gov. Dan Forest and the treasurer of at least ONE pro-Forest PAC.

Sources in attendance at Saturday’s convention told us about the details of a nominating speech by Longo:

Aaaaaaaand SURPRISE, SURPRISE.  Chris Turner and his team got reelected over a slate of candidates seeking wholesale change in the county party’s leadership.

Now, why — you ask — would Dan Forest be behind something like this?

Well, my friends, I’m told it has a lot to do with cutting  Pat McCrory’s legs out from underneath him as he mulls a gubernatorial comeback in 2020.  A McCrory comeback would depend on strong support from Mecklenburg County GOP leaders.

Apparently, some folks are thinking a few shiny new toys tossed toward Charlotte might just put the kibosh on those ambitions.

18 thoughts on “Phase TWO of Team Forest’s hostile takeover of the Mecklenburg GOP?”