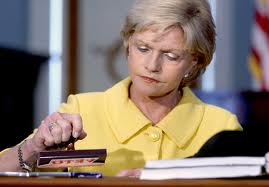 Lame Duck Bev — who polls show is THE MOST unpopular governor in these here United States —  is trying HARD to prove she’s still relevant.

She thought she was pretty smart in vetoing the recently passed $20.2 billion state budget.  It’s still not spending enough money, she says.

The problem is — this budget she just vetoed was basically a modification (adding mo’  money)  of the one passed LAST YEAR that she griped so much about.  So, unless Jones Street overrides her veto, we’re sticking with that budget from last year that makes the granolas gnash their teeth and foam at the mouth.

Governor Dumplin’ also vetoed the rewritten repeal of the 2009 Racial Justice Act. The RJA — in its original form — basically was a roundabout way of making it even more difficult to sentence a convicted murderer to death:

Gov. Bev Perdue on Thursday vetoed the bill that would  have undermined the Racial Justice Act, the 2009 law that allows death-row inmates to try to convert their sentences to life in prison without parole by using statistical proof of racial bias.

“As long as I am Governor, I will fight to make sure the death penalty stays on the books in North Carolina,” Perdue said in a statement. “But it has to be carried out fairly – free of prejudice.”

Um, Dumplin’ — you’re only governor for six more months.  The RJA was nothing more than a gift to the trial lawyers who dump  tons of dinero into Democrat coffers.  It makes life a lot easier for the defense bar, and does a grave injustice to crime victims and their families.

If the leadership on Jones Street has ANY cojones left, they will make her and her disciples in the NCGA eat these vetoes.  Put all of those Dems in the House and Senate ON THE RECORD in this election year as to whether they side with the trial lawyers or crime victims.

Even if you lose the override vote, it might lead to some unexpected victories in November.  It’s better to stand on principle, fight, and lose than to not put up a fight at all.