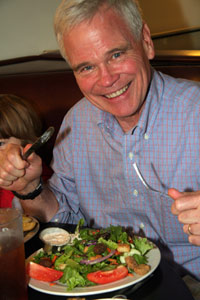 While leading Republican officials are ignoring the party platform and surrendering on important issues like ObamaCare and Common Core, the North Carolina Republican Party and its chairman have set their sights on the host of a little-watched public television program.

D.G. Martin, the host of UNC-TV’s “Bookwatch” program, is taking some heat for a column he wrote comparing the actions of the new GOP majority in Raleigh to those of Hitler in Germany and The Muslim Brotherhood in Egypt.   The NCGOP has issued a statement calling for Martin to be suspended from his on-air role, and for the TV station to “review” its future relationship with Martin. (The column in question was written as a freelance project — outside the auspices of UNC-TV.  Martin has issued an apology for the comments in his column.)

I am a former drive-by journalist, and a big fan of The First Amendment.  It appears that Martin wrote the column as a private citizen.  I completely disagree with the thesis of his article, but I respect his right to say it.  Media outlets which publish his columns should offer plenty of space for people to rebut Martin’s point.  That’s democracy.

I can think of two other, much better, ways to “attack” the issue than what NCGOP  HQ did:

1) Martin describes the NCGOP agenda in Raleigh as “excesses” — much like what the Nazis did in Germany when they came to power.  I’d bring up state government’s eugenics program — which ran from the 1920s to 1973.  North Carolina state government was completely dominated by the Democratic Party at that time.  The Nazis — as we know from history courses — dabbled in eugenics, as well.  The Republican-dominated legislature — so derided by ol’ D.G. —  passed reparations for eugenics victims this session.  The North Carolina Democrat Party never broached the subject.  Wouldn’t the eugenics policy condoned, carried out — and never apologized for — by the North Carolina Democrat Party be a much more appropriate example of an “excess”?

The Nazi Party platform also called for nationalization of industry and made use of class warfare rhetoric and confiscatory tax rates.  Now WHICH American political party does that sound more like?

2)  Why do we still have state-funded television?  That’s a question that needs to be seriously considered in Raleigh.  Public broadcasting may have been more significant in the 50s, 60s and 70s when we had rabbit-ear TVs and only three channels.  Now, we have podcasts, streaming Internet video, and multitudes of viewing options from cable and satellite providers.  WHAT does UNC-TV have to offer that you can’t find on any of those other private options?

I don’t want to hear any of that junk about the poor suffering if UNC-TV gets defunded.  It’s pretty clear that UNC-TV’s target demo is Prius-driving yuppies in Chapel Hill and North Raleigh.  Are we seriously expected to believe people are sitting around the TV in trailer parks and housing projects across the state watching those rebroadcasts of Downton Abbey, the opera performances at The Met, and D.G.’s hoity-toity author interviews?

We’ve got a lot of debt to pay off to the feds for unemployment insurance.  People are screaming about how we don’t have enough money to pay for education or roads.  Legislators are trying to force toll roads on us to come up with extra revenue.  Getting the state of North Carolina out of the broadcast television business would be an excellent way to free up some additional revenue without further squeezing state residents.

7 thoughts on “Hitler, The Muslim Brotherhood, the NCGOP and ol’ D.G.”