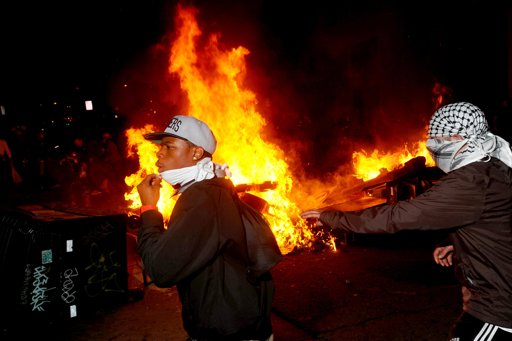 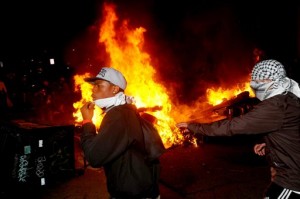 Looking at the picture accompanying this post, you would think it was taken in some part of the turbulent Middle East.  But, sadly, no, it was from recent “protests” in Oakland, California by the “Just-Like-The-Tea-Party” Occupy movement.  (Remember those firebombings and tear-gassings during Tea Party rallies?  Me neither.)

These are supposedly average innocent people upset with Wall Street.  But an interesting new op-ed by author Michael Prell suggests that Wall Street is actually benefiting from this chaos in the streets:

If that sounds counterintuitive to you, then check your intuition. Because, in the midst of all these Occupy Wall Street protests, Wall Street and the White House — arm in arm — are laughing all the way to the bank.

Here’s an interesting set of facts that you may have noticed but have probably cast aside because they don’t seem to fit the narrative:

Fact B: Those same big, rich Wall Street “fat cats” overwhelmingly support and fund Democrats and President Obama, with The Washington Post reporting that “Obama has brought in more money from employees of banks, hedge funds and other financial service companies than all the other GOP candidates combined.”

The riddle of this column is: How do you square Fact A with Fact B?

As The Washington Post put it, “This fundraising edge might seem counterintuitive in light of Obama’s thorny relations with business groups and Wall Street executives.” But their relations are far more than thorny. The Obama White House, the broader administration and the Democratic Party have been repeatedly and openly hostile to Wall Street fat cats: blaming them for America’s problems and offering more Wall Street regulations and taxes as the solution.

And that’s the solution to the riddle of this column: regulations and taxes.

You see, Wall Street “fat cats” aren’t like most of us. They don’t create things of value to earn their living. I wrote a book and this column, and if you value what I create, then you will support my work. A plumber fixes your pipes, which is valuable when you’re up to your ankles in water. A trucker brings food to your local grocery store, which is valuable when you’re hungry. A teacher teaches your children. The editors of this website produce a collection of stories each day, which they hope you will value enough to support their ongoing efforts.

Wall Street does none of this.

If you’re a wealthy CEO or corporation, and if you want to circumvent the latest government regulation, Wall Street is where you go — with bags of cash — to get your problem solved. And that’s why the more you regulate fat cats, the fatter the fat cats become.

If that sounds counterintuitive to you — then check your intuition, follow the facts and follow the money. After America’s airports, Wall Street is one of the most regulated places in the country. And, while we creators in the real economy have suffered these past years, Wall Street has flourished. Household income fell 6.7% between 2009 and 2011, and dropped 3.2% between 2007 and 2009. By contrast, Wall Street profits have gone up 720%.

It may be an inconvenient truth, but it’s the truth. The real beneficiary of these Occupy Wall Street protests is Wall Street. Forget your intuition, forget the spin and the soundbites, and do what Wall Street and the White House always do — follow the money.