First they came for the Socialists, and I did not speak out—
Because I was not a Socialist.

Then they came for the Jews, and I did not speak out—
Because I was not a Jew.

Then they came for me—and there was no one left to speak for me.

In the 1950s, liberals protested angrily at what they saw as Joseph McCarthy’s efforts to lump them in with Communists and other enemies of America. In the 1960s, liberals in North Carolina protested mightily — ultimately successfully — against the Speaker Ban on UNC campuses.  All points of view need a fair airing, they argued.

Fast forward to 2016.  Leftists have a controlling majority in the government bureaucracy, academia, the media and the entertainment industry.  Dare to stray from their party line, and you’ll find yourself denounced, ostracized, blacklisted and likely unemployed.

The Internet is a great thing. No longer do elites in DC, L.A. and NY have control of what you see and hear.  There are multiple sources to get your information.  You can instantly criticize what elites communicate to you, and even debate them.

You would think — given the arguments put forth in the 50s and 60s — this would be welcomed on the left.  (Nope.)

Leftists can wear their group identity membership on their sleeves like a badge of honor.  Dare to criticize said leftists and you, sir or ma’am, are a homophobe, racist, anti-semite, etc. etc. ad nauseum.

We wrote earlier about Rob “Scowly” Schofield — Ernie to Chris Fitzsimon’s Bert — spewing nonsense about Carolina Plott Hound and some other bloggers being fonts of anti-semitism and racism.  The accusation was based mostly on the word of The Southern Poverty Law Center —  a pack of leftist

hacks who delight in portraying mainstream conservative groups as “hate organizations.”  Their unfounded smears of The Family Research Center led to a murder at the FRC’s DC offices in 2012.   Here are some recent efforts by conservative leaders to raise awareness about the SPLC.

Now comes The N&O’s Colon Campbell to the fray.  You may remember young Colon for his work during the whole HB2 brouhaha.  He managed to inject HB2 into coverage of sports, and even offered his readers an inspection of the restrooms at the Republican National Convention.  His shameful exaggerations and outright misstatements over HB2 brought his employer — founded as a KKK propaganda vehicle and now begging people to 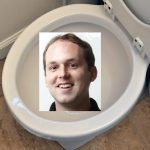 buy their paper — to a new low.

And what makes it “anti-semitic”? (1) The word of the Southern Poverty Law Center, and (2) the word of a leftist columnist / blogger with a very loose grip on the facts  and of questionable sanity.

Here is the article in question.  Read it and judge for yourself.

Young Colon takes things a little further than Schofield did:

[…]The Stein article isn’t the first time that Plott Hound has linked to controversial blog posts and reposted their headlines. Last year, the banner headline on the site called a departing News & Observer editor who is African-American a “doo rag queen” who was leaving the “N&O plantation.” […]

That ‘do-rag’ gem was courtesy of Raleigh blogger BobLee.  It sure would be nice if Colon was honest enough to include the context for the ‘do-rag’ nickname.
But we’ll do it for you:

[…] Linda ordered her reporters to NEVER MENTION the race of “perps” in their crime stories…. unless, of course, they were “white”.  By leaving out any mention of the race of criminal perpetrators, Linda figured N&O readers would not realize the epidemic extent of the problem. Clever Linda…. very clever.

About six months after “the assault that never happened” involving the “rich white boys” there was another sorta similar incident over in Durham.   This one involved an African American fraternity party at which a “white girl” was assaulted by…..

The N&O reporter – handcuffed by Linda’s Rule to NEVER MENTION THEIR RACE ….had circumvented her edict by noting the perp “was wearing a do-rag” which carries the same ethno-racial connotation as “was wearing a hoodie”.   Do-rags and hoodies being uniform of choice for YBMs “on the prowl”.[…]

The most disappointing part of this story is Civitas boss Francis DeLuca kowtowing and groveling to Colon and Schofield:

[…] On Friday, De Luca said the headline doesn’t reflect his organization’s views on Stein, and he said he’ll be reviewing the future of the Plott Hound website. 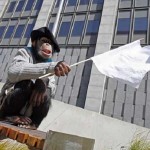 “The truth is, the person who edits it sometimes doesn’t use the best judgment,” De Luca said. “We’re going to review all the policies that surround it, and we’ll also consider whether it fits into the overall mission of what we’re doing. It may be something that we get rid of or we change what it is.”

“I’m sorry Policy Watch was offended by it, but they’re easily offended. We would never intentionally be derogatory towards anybody or any religion or ethnicity.”[…]

Killing the web site AND throwing your employee under the bus.  *Talk about a profile in courage.*
I guess this guarantees that the guy over at Triad Conservative, BobLee and his sidekick Agent Pierce, will all join me on the Pope Empire’s blacklist.

Everyone ought to be concerned about this state of affairs.  It’s the same M.O. from the early days of Hitlerian Germany and Stalinist Russia: Authoritarian thugs single out people who refuse to roll over and submit to their agenda.

I know this site HAS to be next on the thugs’ list.  All I can say to that is: Molon Labe. (Come and Get it.)

I won’t be as easy a Get as Francis DeLuca and John Hood were.