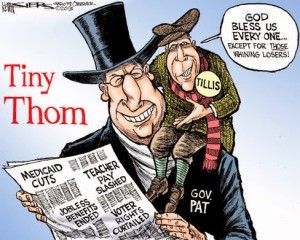 I am hearing from quite a few folks who heard from Pat McCrory on their home telephones Sunday evening.  The governor was telling them how important it was to vote for state House speaker Thom Tillis in Tuesday’s GOP primary.  Yes, that’s right.  The — for all intents and purposes — HEAD of the North Carolina Republican Party is butting in on a hotly-contested Republican primary race.

We’ve all been subjected to lectures from Raleigh about the importance of GOP leaders staying OUT of party primary races.  Yet, Thom Tillis is on record as having meddled in a number of legislative primaries in Eastern North Carolina.  Former NCGOP vice-chairman Wayne King got caught meddling.  We’ve got an NCGOP staffer working on the campaign of an incumbent legislator currently involved in a primary.  The NCGOP executive director’s consulting firm — is actively aiding at least one candidate involved in a primary race.  And NOW we have the governor actively taking sides in a hotly-contested primary race.

In 2008 and 2012, we conservatives were told to set aside our concerns about Pat McCrory and work together toward getting an R in the governor’s mansion.  Never mind that he helped the Democrats push through tax hikes in Charlotte. We were good soldiers in both of those races. Now, our loyalty gets repaid by McCrory-ite establishment types trying to block and take out bona fide conservative candidates.

In my lifetime, I can remember when the NCGOP was little more than a small coterie of country-clubbers in Raleigh, Charlotte, and Greensboro.  GOP primaries were all about picking someone to be a sacrificial lamb in the November general election. Then, Ronald Reagan and Jesse Helms came along and made it cool to vote — and register as — Republican. Both of those guys — Reagan in 1976 and 1980 and Helms every six years — got blasted as extreme and unelectable by liberals, the media, and GOP establishment types. Both of those leaders had an enormous impact in-state and across the country. They set the table for the GOP dominance we are seeing in Raleigh today.  Unfortunately, it appears that the powers-that-be in the NCGOP have learned nothing from history.  They are trying really hard to revert back to the form that kept the party a geographically-restricted afterthought and novelty.

The establishment is trying hard to push a candidate on us for US Senate who has been very impressed with alternative energy mandates that drive up the cost of electrical power.  That Senate candidate is backed by Karl Rove, Mitch McConnell and John Boehner who have all expressed glee over the idea of “crushing” The Tea Party.

The establishment has been working THIS year to remove opposition to toll roads, amnesty AND ObamaCare from the NCGOP platform.  It appears they’ve been quite successful so far. 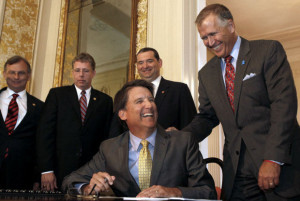 Our Founding Fathers rose up against a government that oppressed the people with outrageous taxes and regulations, and stomped on the rights of the common man.  During the civil rights movement, courageous average Americans took a stand for personal freedom against government sanctioned tyranny.  Judging from what we see coming out of DC and Raleigh on a daily basis, we’re close to coming full circle.

What does it mean to be Republican?  Giving the people only 90 percent of what the Democrats would have done?

Are we going to keep tolerating two groups of statists taking turns controlling our lives with their hands in our wallets? Will “Just Give Me My Check” continue to drown out the cries of “Freedom!”   Has the passion — the fire — of 2009 and 2010 flickered out?

It appears We’ll know by the end of the day Tuesday.  If you don’t vote — don’t make your voice heard — or do vote for more of the same, you’ve already surrendered to the idea of statist elites running your life FOR YOU.