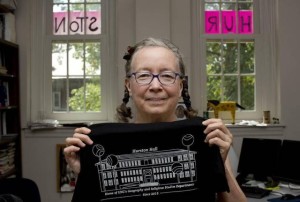 I know. I know. Very similar to “crazy.”

We’ve provided a lot of coverage to the saga of Gene Nichol, the alleged law professor at UNC, who appears to do little more with his six-figure salary than publish articles bashing Republicans. The UNC Board of Governors reined him in a little.  But there’s an elderly female version of Nichol creeping around the Orange County campus you need to be aware of, as well.

If there is a leftist protest in the Triangle region, you can be pretty sure that UNC professor Altha Cravey is close-by.  (On Twitter, she posts under the handle ‘@LocoCravey” and describes herself as “good at raising hell.”)

In one high profile case, she was trumpeting the cause of “free speech” on the UNC campus.    Then, she turns around to cheerlead attempts to remove any historical reference to the Confederacy from the campus, and

spearheads a recent protest to shout down the UNC board of governors over the hiring of Margaret Spellings (who I don’t think has even started work yet).   Free speech is great if you agree with ol’ Altha.

In the fight against Spellings being hired as UNC president, Cravey frets a lot about potential damage to the quality of education.  Let’s take a look at some of the reviews of her courses some former students have posted to give us a sense of just what Cravey is contributing to public education:

Just like with Nichol, it appears we’re paying someone to be a left-wing agitator at the expense of our wallets and our kids’ futures.