North Carolina governor Pat McCrory can probably relate to former Ferguson, MO. police officer Darren Wilson. In both men’s cases,  the drive-bys strongly suggested crimes were committed.  But when you actually look beyond the screaming headlines, and check the facts, there’s not much there to support the claims of the drive-by media and the leftist lynch mob.

slimed with an AP hit piece insinuating they took bribes from Lending Tree — a Charlotte based financial firm where both men served on the corporate board.  I have to stand up and applaud the North Carolina governor’s staff for firing back with gems like THIS and THIS.

When I was a drive-by, I had some dealings with the AP’s Raleigh bureau.  I regularly crossed paths with one of their writers — who shall go nameless here.  This guy would regularly call me up and ask me about what happened at press briefings he missed.  I would recount it for him.  The next thing I knew — there would be a story out on the wire under this guy’s byline regurgitating what I said.  The story would read like this guy was actually there when events transpired.  My name is nowhere to be found in the story. If I was a dishonest person, I certainly could have used this AP guy to spin something my way statewide, nationally, and internationally. 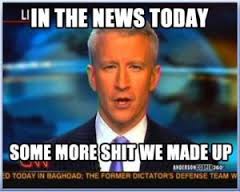 edia outlet I worked for was a subscriber to the AP’s wire service.  As a result, the AP was entitled to take copy generated by our newsroom staff, strip the bylines from it, and run it as original AP product.  There was no fact-checking.  They’d simply stick it out there on the wire for statewide, national, and international consumption.  There is a huge potential here for another Stephen Glass episode.

In this age of The Internet, and social media like Twitter, Instagram and Facebook, how truly relevant are the newswire services?  Their widespread use in papers across America make them a useful tool for politicos pushing an agenda.  Spin a reporter for The Fayetteville Observer  and you’ve got a story in ONE paper in ONE town.  But successfully spin an AP reporter, and you’ve got statewide, national and international reach for your version of events.

Drive-bys like WRAL’s Binky are indignant at Gov, Pat’s calling-out of the AP reporters in question.  Reporters —

just like bloggers — need to be able to take it as well as they dish it out.  (Especially when you are dishing out something that doesn’t come close to meeting the sensational flavor of its headlines.)  There are way too many reporters out there with visions of becoming the next Woodward or Bernstein.  Take down a president, a congressman, or governor.  Though, If you’re going to hit someone, make sure you’re not firing blanks.

10 thoughts on “#ncpol: The AP has AProblem”