Hillary Clinton can’t get past November.  And, apparently, neither can Pat McCrory: 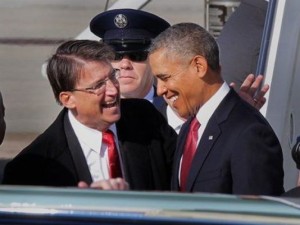 Former Gov. Pat McCrory says Trump voters who voted for the Libertarian candidate in the governor’s race were partly to blame for his loss last year, and he says he’ll wait until next year to decide if he’ll run again in 2020.

McCrory did a lengthy interview Sunday with David Chadwick, a Charlotte pastor who hosts a religious radio show on WBT. The interview marked the one-year anniversary of McCrory’s election loss to Democrat Roy Cooper.

McCrory said he initially ran for governor to change what he calls a “a good ole boy culture of corruption” in state government, and while he succeeded during his four-year term, there’s more to be done. “I see that culture start filtering back, both Republicans and Democrats,” he said. […]

*Oh, you mean stuff like folks getting special attention from government officials based on how much campaign money they cough up?  Hmmmmmmm?*

“That’s why I won’t rule out running again. I will think about it after the 2018 elections, and I’ll see if I can afford the alimony payments.” That comment was a joke about his wife, Ann McCrory, who is less than thrilled about the prospect of his return to politics.

He says Ann has “basically moved out of Charlotte” because of threats and harassment the couple has received there. “Here in Charlotte I’d go to events and 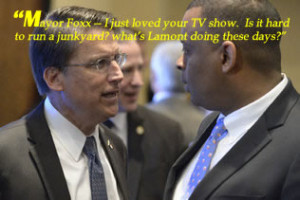 people would do the ‘F. U. McCrory,’ and ‘you blankety blank blank,'” he said. “The college campuses were the worst. My wife wouldn’t walk with me. One time we went to Asheville, and she walks on the other side of the street from me, because she didn’t know what would happen.”

The former governor also reflected on his re-election loss, suggesting that one reason was the differing messages when he’d appear with Trump at campaign rallies. McCrory would highlight his “Carolina Comeback,” while Trump would paint a negative picture of the economy. “I lost about one or two percent of the Trump vote that went and voted for the Libertarian,” he said, adding that coupled with House Bill 2 and I-77 toll lanes, “it was really a death of a thousand cuts.”

A lot of RINOs are getting ready to learn THIS hard lesson:  To get votes, you have to GIVE people a reason to vote FOR you.  When you blow off the party’s commitment to 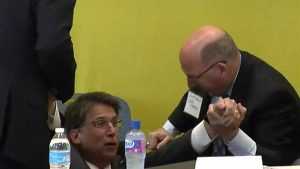 lower spending and lower taxes, conservatives have a problem with you.  When you collude with Thom Tilli$$$ and some other political cronies to shove toll roads down people’s throats, you can expect some resentment.

Ol’ Pat inflicted an awful lot of those thousand cuts on himself.