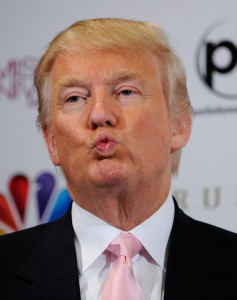 Republican presidential candidate Donald Trump was paid $1.35 million since last May for three speaking engagements for a network marketing company that has been accused of being nothing more than a pyramid scheme.

Trump’s presidential financial disclosure, which was released on Wednesday by the Federal Election Commission, shows that he has been paid $450,000 each for three speeches given on behalf of ACN Inc., a North Carolina-based “multi-level marketing” company. The celebrity and real estate billionaire spoke most recently at ACN’s annual convention which was held in Charlotte in February.

Trump first became involved with ACN in 2006. In 2009 and 2011, company executives appeared on the mogul’s NBC reality show, “Celebrity Apprentice.” During one of those episodes, a video phone ACN was selling was a featured product.[…]

“The essence of the whole thing is kind of a card trick,” says Robert FitzPatrick, who operates the website Pyramid Scheme Alert and is the co-author of the book “False Profits.”

Of the many multi-level marketing companies that exist, ACN is “one of the more predatory and aggressive,” FitzPatrick told The Daily Caller. He said that the company not only charges its agents hefty up-front fees, it also forces them to sign lengthy contracts for products and services that the company sells.[…]

Folks who have been following this site, and North Carolina politics, for a while may remember ACN from coverage of the 2014 US Senate campaign.  You may remember this report on some Super PACs that popped up during the Senate race:

[…] A small North Carolina-based super PAC with ties to a Republican Senate candidate reported two donations from LLC shell corporations today. While corporations and labor unions can make direct, and unlimited, contributions to these committees, they must be identified by the recipients. But if the donor company itself is shrouded in secrecy, that transparency evaporates.In this case, however, a review of corporate records reveals the likely sources of money — a total of $50,000 — to be a car dealership and the chairman of a direct-selling company.
Grow NC Strong, a super PAC founded last May, reported raising $159,000 in 2013, and spending about $64,000 on consultants and overhead. The group made no independent expenditures on behalf of a candidate, although the group’s website proclaims support for Thom Tillis, a Republican challenger to Sen. Kay Hagan (D-N.C.).
According to the filings made this morning, the group raised $54,000 in the second half of the year, including $25,000 donations apiece from Dawn Properties LLC and TC Investor LLC. Simple Google searches on the companies don’t reveal much, but North Carolina corporate filing records shed more light on who is behind these donations.
According to the state’s records, Dawn Properties LLC shares an address and ownership with Randy Marion Automotive LLC, which was founded by Randall Marion, of Mooresville, N.C. Marion operates a chain of car dealerships, selling GM and Subaru cars.

TC Investor LLC is slightly more mysterious. According to state records, it is registered by a corporate agent company that effectively shields the founder’s name.
However, another LLC is listed as the company’s manager — Praescient LLC, which is registered at a rented UPS mailbox. State records show that Praescient’s registered agent is a Charlotte, N.C., attorney and its manager is a man named Robert Stevanovski; his wife, Sonya Stevanovski, is listed as a member. Both Marion and Stevanovski, and their wives, have contributed the maximum $2,600 apiece to Tillis’ primary effort this election cycle.
Stevanovski is chairman of ACN Inc, a company that provides energy and telecom services around the world, but using a “direct selling” method, which recruits independent sales representatives who then recruit other representatives. […]

And then there was THIS report from Charlotte-area TV station WCNC:

Toll lanes on I-77 – the DOT says they’re coming – but many voters don’t like them.

There have been protests and organized opposition from a group called Widen I-77 as well as from some local elected officials in Huntersville, Cornelius, Davidson and Mooresville.

Thom Tillis supports the toll lanes. He has for years. In a May 2011 televised interview on Carolina Business Review, Tillis told interviewer Steve Crump, “I think we have to take a serious look at toll roads…we don’t have enough money coming in for the needs we have.”

Now the NBC Charlotte I-Team has documented that a group of big time Tillis campaign contributors stands to make millions from your tax dollars tied to the toll lanes.

This story all starts with a prime piece of Cornelius real estate called Augustalee.

Before the great recession, developers dreamed of turning this old farm into something like Birkdale Village. They planned a half billion dollar complex with shopping, office space, a hotel and condos.

But in the recession the deal went bust. The bank took the land. Then a couple of years ago a group of executives from a company called ACN bought Augustalee at the relative bargain price of $7 million.

ACN is a multi-level marketer like Amway. It’s based in an office building clearly visible along I-85 in Concord, NC. ACN received tax incentives to move to North Carolina from Michigan in 2008.

When ACN executives invested in the prime Cornelius property, they needed one key thing to develop Augustalee – a new exit ramp off I-77.

With an exit – insiders say their land more than doubles in value – and they stand to make millions. Without it, Cornelius town leaders say no one can develop the property because a development that size would require access to 77 at or near Westmoreland Road.

To the NC DOT, a new exit 27 has never been a priority. There are too many other projects that have ranked higher in the state formula for funding. So who would pay?

Here’s the thing: the toll lanes come with an all new bonus fund – taxpayer money from the highway fund which could pay for exit 27 and then some.

In the transportation bill passed by Tillis and the legislature, the size of the bonus fund is set at half the amount of the bonds issued for the toll lanes. So how much is that in the case of the I-77 toll lanes?

“The bonus allocation is new money coming into the region related to a toll lane project,” said Cook. The legislation calls it an “incentive” to take the toll lanes, a little sweetener you might say for the bitter pill of a half century of tolls.

House Speaker Thom Tillis is widely regarded as one of the most politically powerful men in the state and he supported the transportation bill with the bonus fund tied to the toll lanes.

The Governor signed the bill last year on June 26.

On June 27 – the very next day – a group of ACN executives and their wives donated $26,000 to Thom Tillis’ senate campaign.

NBC Charlotte tried to reach Thom Tillis by email and phone calls to his campaign staff for almost two weeks for comment on this report.

His campaign manager Jordan Shaw declined to make him available but told us in a telephone interview that the timing of the contributions was just a coincidence – because the speaker had a fundraiser that day.

“There is no connection to be made there,” Shaw said. “To try to make that kind of connection I think is a leap that I think is going to be difficult to defend.”

But there was a second political contribution from ACN which coincided with state action moving toward a new exit 27.

“Here I sense a real spirit of common vision for the community,” Decker said after a special called meeting of the town commission with a bus tour of development sites.

That was September 13. On September 18, five days later, a company called TC Investors donated $25,000 to the superPAC Grow NC Strong which backs Thom Tillis for the US Senate.

TC Investors is managed by a company run by Robert Stevanovski – founder and chairman of ACN.

2 thoughts on “#ncpol: officials with controversial Charlotte-area company that paid Trump have hi$tory with $en. Tilli$”