There is quite a bit of fuming going on among the grassroots about a recent fundraising letter sent out by the state Republican Party.  The letter calls on recipients to “Re-Elect Senator Richard Burr” — despite the fact that he has TWO primary opponents.

Well, NCGOP chairman Hasan Harnett was asked about this matter on a closed Facebook discussion group.  Here’s what he said: 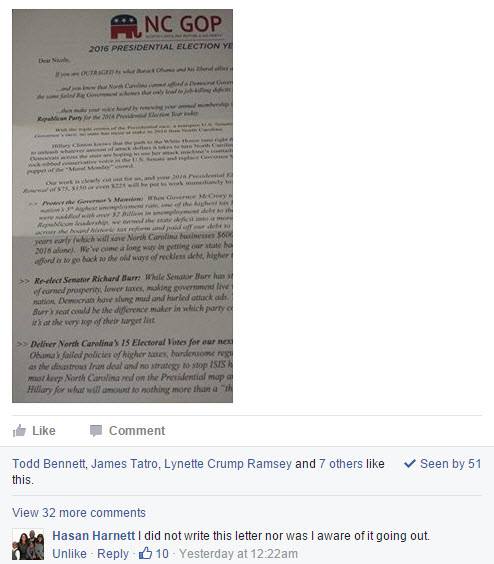 Why issue this denial on a private Facebook forum instead of doing it publicly?   Going public would make Harnett look ineffective, in the dark, and incompetent.  And there are PLENTY of people inside and outside the headquarters building trying to reinforce that perception.

The governing bodies of the NCGOP bear much of the blame for stuff like this.  They have handcuffed and restricted the chairman and vice-chairman of the state party unlike ever before.  Chairmen are usually allowed to pick their own candidate for executive director. But the governing bodies of the party have foisted this BOOB — who thinks bumper stickers are personal fashion accessories — on Harnett, vice-chairman Nix, and the party’s hapless  and frustrated activists.  Couple this with the tolerance of David Lewis’s antics, and you have clear evidence that the leadership in Raleigh are thumbing their noses at the masses outside the beltline who GAVE them the power they now enjoy.

Some grownups really need to step in, clean house, and re-establish order in the NCGOP house.