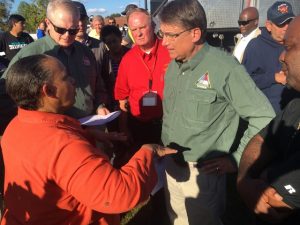 As people all over eastern North Carolina scramble to recover from last weekend’s storm, there is another angle the storm’s aftermath will impact:  the November election.

You have hundreds of thousands of people in the eastern part of the state either without power, without water, or completely displaced from their homes.  In a lot of these places, it is unlikely that normalcy will return by election day.

Polling of the state between now and election day will be pretty dubious.  You’ve got a whole lot of people who can’t watch TV, get on the Internet, or answer a call on their landlines.

Turnout.  While trying to round up your family members, secure your belongings, and find new shelter with electricity and water, how far down the list will mailing in your ballot or going to the polls be?   I think this part has Democrats worried.  A lot of the hardest hit communities are Democrat strongholds.  The Congressional Black Caucus chairman has already been trying to get the voter registration deadline extended for the November election. 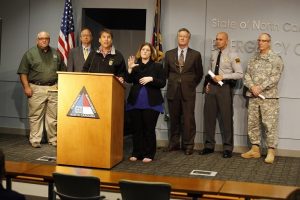 GOTV:   Getting Out The Vote.  As I stated earlier, there are still a whole lot of people without TV or Internet access in the eastern part of the state.  Many of those communities are served by local newspapers whose printing operations were shut down by the storm.  You also have a lot of folks displaced from their current places of residence.  How do you reach these people to give them one more reminder about your campaign and that they need to go vote for you?

Governor.  The storm cleanup gives McCrory a chance to get out there in front of the cameras and look like a leader — without needing to even touch politics. Meanwhile, the Cooper campaign sticks with ads slamming the guy out there helping these people recover as a liar, hater and a screwup.  Honestly, WHO will end up smelling better to voters here?

One thought on “#ncpol: Matthew the new star of North Carolina’s elections?”