Those of us out here in the real world who believe something as radical as “Those born male ARE male, and those born female ARE female” are regularly savaged as bigoted pigs by the civility crowd over there on the left side. Democrats are making a huge stink out of it all this election year — making that piece of common freakin’ sense sound like a public reading of ‘Mein Kampf.’

Roy Cooper and the Democrats have told us they are not helping out on defending the state against lawsuits over HB2.  Never mind that ol’ R.C. got reelected as OUR LAWYER four years ago.  Can you imagine paying your attorney, and then him having the gall to tell you he’s going to keep your money but not help with your case?

Well, it appears ol’ Roy has had a change of heart.  (Or has read a poll, or talked to some real-world people outside of Orange County.)  He’s deciding to help out in the fight to defend HB2.  Or something.

Meanwhile, the federal Justice Department has been making all kinds of noise against HB2.  We’re told it’s really bad to discriminate against people who don’t easily fall into — or don’t think they do — the male or female category. 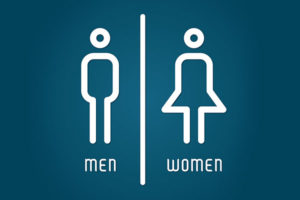 Now comes word the US DOJ will be defending the Obama administration against a lawsuit by a person “born intersex” who doesn’t feel the need to ID, um, “themself” on the passport application as MALE or FEMALE.  You HAVE to pick one, Uncle Sam argues.

Okay. Let’s see if I get this.  So, it’s “BAD” to make a person ID themself as male or female when picking a bathroom or locker room.  But it’s NOT for the purposes of getting a passport for the purpose of traveling or identifying onself?

4 thoughts on “#ncpol: Lefties,bathrooms, passports and the “intersex” thing”