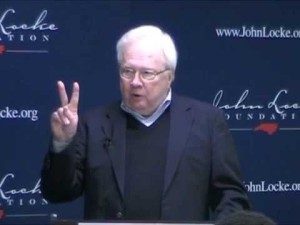 I’ve had my suspicions about what HAS or HAS NOT been going on within the John Locke Foundation lately.  The so-called hotbed of free market thought in North Carolina has been — lately — championing things like reparations and the installation of tracking devices on cars (for the purposes of taxation).

I’ve also been hearing stories about the new Swanson-Gray regime cracking down on any employee who dares to criticize big government antics of anyone in Raleigh with an R next to their name.  I hear Becki Gray herself has been censoring and spiking all kinds of pieces that may make either Jones Street or Blount Street unhappy.
I got a mailer the other day from the JLF touting their “Candidate Education Forum.”:

“Reliably conservative elected officials are retiring! We must educate and inspire a new generation of principled leaders!”

And who is the “face” — the spokesman — for this particular JLF campaign?  Phil Kirk — the grandaddy of North Carolina RINOs himself.

For those not familiar with Kirk, just browse on over to his eponymous web site.   Kirk was top aide to three nice guys — Jim Martin, Jim Holshouser, and Jim Broyhill — but big-time RINOs.  He was appointed to the state board of education by Governor Jim Hunt (w

ho also praises Kirk in a blurb on Kirk’s website), and continued to serve there well into Mike Easley’s first term.

Check out some of the positions he advocates in op-eds posted on his website:

Is this where conservatism in North Carolina has come?  Have we gone from John East, Jesse Helms, and Lauch Faircloth to THIS?   The folks at Locke like to portray themselves as the last bastion of rebellion inside the beltline against the welfare state.  How does that image maintain any credibility when your public “face” is that of the granddaddy of all RINOs?