Former Governor Pat McCrory is not keeping it a secret that he’s eyeing either a run for governor or the US Senate in the near future.  That’s surely a concern to Lt. Gov. Dan Forest and his team.  Forest has made no secret of the fact that HE would like to be the GOP nominee for governor in 2020.

Some political observers in the Charlotte area are noticing some peculiar behavior on the part of the lieutenant governor and his team.  Forest has long held the position that he does  not make endorsements in intra-party contests.  Yet, he’s been recently backing a number of establishment-leaning candidates seeking GOP positions in the Charlotte area.  (McCrory and Forest both have roots in Charlotte.)

One such recent endorsement was John Steward, who was running for reelection as chairman of the embattled Ninth Congressional District.  Steward has been closely tied to McCrory in the past.

It’s no secret to the sharpest of political observers that McCrory would need his shock troops from Mecklenburg back on his team and under his banner to wage a competitive race for governor in 2020.

Another interesting piece of activity in Mecklenburg County is the race for county GOP chairman there. The establishment incumbent is seeking reelection against a grassroots challenger representing Republicans upset with the 2018 election results.  Republicans in  the Charlotte area, just like in the Raleigh area, got wiped out in 2018.  ( State senator Dan Bishop is one of the few remaining significant elected Republicans left in the Charlotte area. )

Well, it appears the establishment incumbent who presided over the 2018 electoral disaster is now tooting his own horn about the acquisition of new FREE prime office space for the county GOP organization for the upcoming election cycle:

We talked with some folks on the ground in Mecklenburg and did a little digging to see if we could find out who this generous benefactor was.

Here’s what we understand is the property in question: 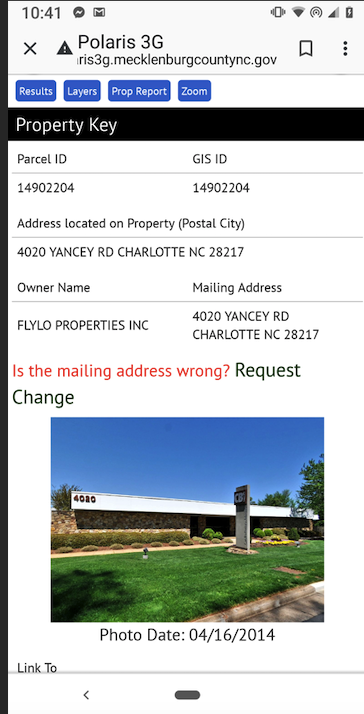 Okay,  now WHO — you ask — is FLYLO Properties? 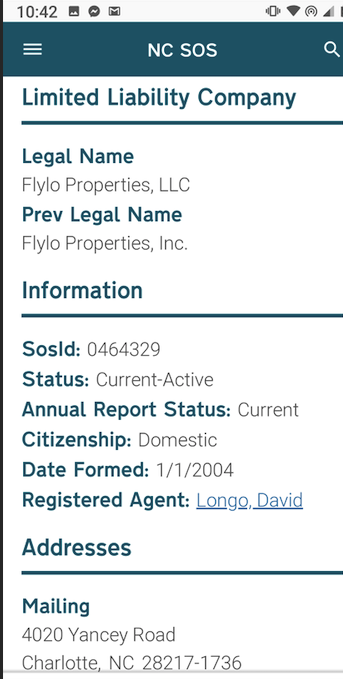 That’s tied to a guy named David Longo — the same name of a guy identified in drive by media reports as a close friend of Lt. Governor Forest and the manager of a pro-Forest political action committee.  (There can’t be too many David Longos floating around the Charlotte area.)   4020 Yancey Road also houses the offices of CBI, which is David Longo’s business.

4020 Yancey Road IS hosting the 2019 county convention for the Mecklenburg County GOP.

We’re told that the gift of the office space to the Mecklenburg GOP is contingent on the incumbent (big McCrory fan) chairman being reelected.