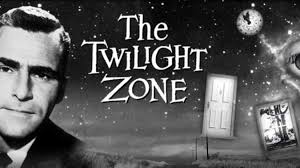 There are so many bizarre things happening this political season, I am expecting to start hearing voice-overs from Rod Serling.

It wasn’t long ago that General Assembly Republicans were boasting about spending MORE than the Democrats.  Now, we have the House Republican Caucus political operation attacking a Democrat challenger for wanting to offset spending increases with spending cuts:

So, cutting spending is now anathema to the NCGOPe?   The real “Yikes” here is that a Democrat challenger is running to the right of an incumbent Republican legislator (and apparently the House GOP caucus).

Are we expected to believe that there is NOTHING in state government that can be cut?  How about a good chunk of the stuff on THIS PAGE?

Raleigh Republicans appear to really be scared of this woman.  Not long ago, they released a full-blown opposition research report that revealed personal details about her family and their personal and business finances.

(*The report featured such bombshells as the fact that she got a speeding ticket 12 years ago.*)

Why not raise questions about her and her party’s big-government beliefs?  But that’s tough to do when you yourself (and your party) are warmly embracing some of those very same beliefs and practices.

Nationally, the GOP — inspired by President Trump and his followers — is thriving while pursuing an aggressive swamp eradication agenda.  Trump has won the hearts and minds of voters who are putting heat on their DC leaders to do the right thing.

Meanwhile, the NCGOPe is focused on the (R) next to people’s names and holding onto their jobs and the public purse-strings.  They may benefit in November from the grassroots goodwill engendered by the Trump movement.  But they don’t deserve it.

But the NCGOPe is, in the end, doing a real disservice to its voters who think they made it clear they wanted radical change in the way business is done in Raleigh.