Supposedly, the NCGOP is all about pushing the interests of the Republican Party.  Heck, the GOPe tells us all the time it’s about Republican victories and NOT conservatism.   Then, we see something like this on the NCGOP Twitter feed: 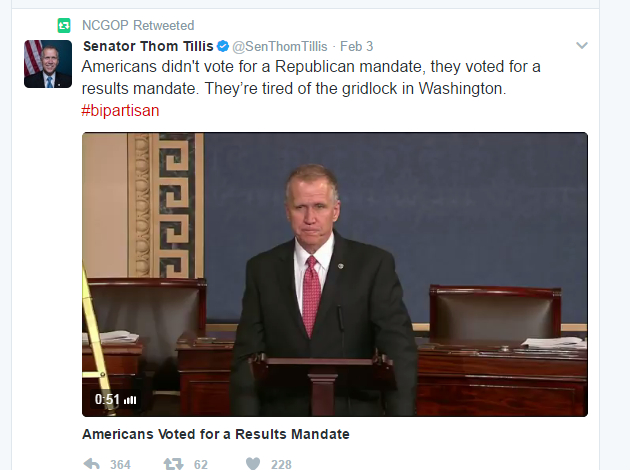 “Americans didn’t vote for a Republican mandate.”  And THIS got retweeted — in essence, celebrated — by the NC Republican Party leadership.  So, IF Tillis is correct, and the voters don’t give a hoot about the GOP and want cats and dogs and Republicans and Democrats living together and working together, what is the point of the party itself? Why even exist?

I am sure this was the work of some college intern infatuated with the Senator from Time Warner.     Their hero made a speech.  Never mind the stupid content of said speech.

Meanwhile, the state party’s Twitter feed continues to promote the 2016 early voting schedule AND Dallas Woodhouse’s burgeoning TV career on MSNBC and Fox News with his brother — who we last heard had an appearance in a video that looked to implicate him and his group in a scheme to pay thugs to beat up old people at Trump campaign rallies. 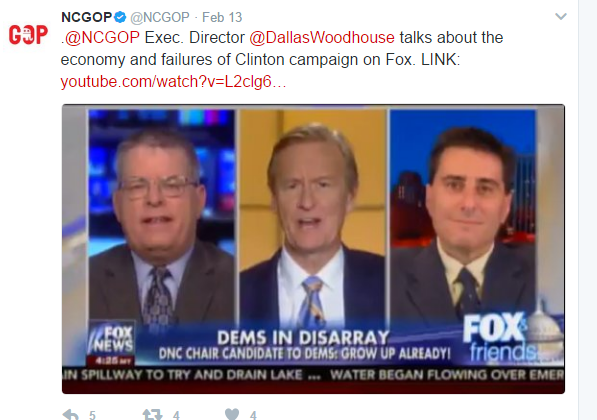