In the spirit of Thom Tillis, we’ve seen some “bi-partisanship” in the North Carolina House:

New legislation filed by Republicans in the North Carolina House of Representatives seeks to make changes to House Bill 2, commonly referred to as the “bathroom bill.”

It would fully repeal HB2 and update to state’s non-discrimination laws to match federal protections.

State colleges and universities, along with some other organizations, would have the option to expand their non-discrimination policies beyond those spelled out in the bill.

McGrady, who sat down with WBTV after introducing the bill, said getting two Democrats to co-sponsor the bill was “critical.”

Amazing.  We’re getting all bi-partisan and compromising on the concept that BOYS ARE BOYS and GIRLS ARE GIRLS. 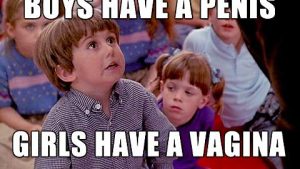 The bill looks to pre-empt access to multi-occupancy bathrooms, showers, and changing facilities. It allows cities to regulate single-occupancy bathrooms. Sponsors hope the bill if passed, would keep people from pointing to a law in North Carolina and say it is discriminatory regarding bathroom usage.[…]

[…] The legislation requires cities who want to pass their own, broader, non-discrimination laws to take extra steps before enacting such ordinances. There will be limitations on those ordinances, according to the proposed bill, including that ordinances cannot apply outside of the territorial jurisdiction, can’t use contracting power to impose ordinance provisions, can’t apply to bathroom access or religious organizations.

The proposal would allow cities to provide nondiscrimination for its own employees. It also seeks to add increased penalties for crimes committed in a bathroom “regardless of motivation.”[…]

How can this be kosher without  a constitutional amendment? The state constitution says you have to get legislative approval in Raleigh before making local ordinance changes of this nature.  Of course, our wet-noodle of a governor is having NONE of this:

[…] About two hours after HB186 was filed, Democratic Governor Roy Cooper issued a statement with concerns about the bill.

“We must repeal House Bill 2 and I remain committed to getting that done. But I am concerned that this legislation as written fails the basic test of restoring our reputation, removing discrimination, and bringing jobs and sports back to North Carolina. I will keep working with the legislature.” […]

It’s a shame that a guy who just gone done serving sixteen years as attorney general has such a gross disrespect for the state constitution.  (Well, he did so littl

e work during that time he probably never had time to actually look at the document itself.)

If we get rid of the recognition of differences between men and women, what’s next?  Equality between animals and humans?  Abolishing the age of consent? (Can’t you see them arguing with a straight face that the age of consent is discriminatory against grownups who LOVE kids?)

Folks, there is no compromising here. (Our side — common sense — won at the ballot box in November.)  These people want to riot, intimidate and threaten their way toward changing the culture, turning the laws of nature upside down, and smashing the whole organize religion and family values thing.   Things like the constitution and the actual verbiage in the law are not going to get in their way.

Our side — common sense — has to stiffen its collective spine and stand tough in the face of this violent, destructive rabble.