For a crew that likes to brag about growing the Republican Party, Dallas Woodhouse and his Gramps sure are spending an inordinate amount of time sending threatening lawyer letters to Republican activists: 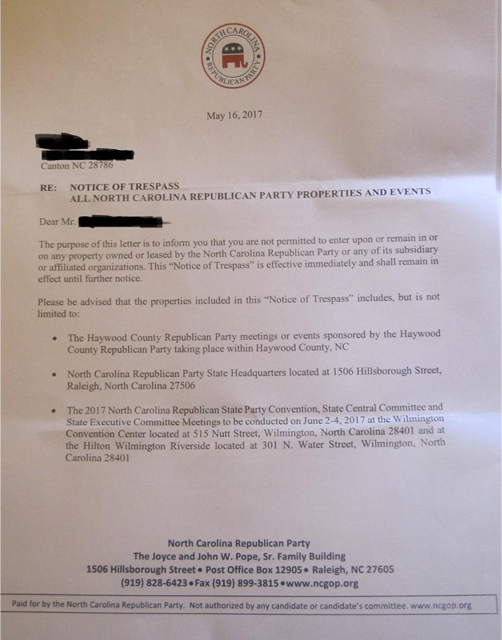 Hmmm.  Is the race to reelect Gramps as state chairman going so poorly that they are having to target conservative “troublemakers” with letters like this?    Banning conservative “troublemakers” — even those who are duly elected convention delegates — from even appearing on site at the state convention in Wilmington?  (*If only Hasan would have had this tactic at his disposal against dear sweet Ma Cotten or Zan.*)

I would think they have grounds to do something like this at NCGOP HQ.  They own THAT property.  But I think the tactic is highly questionable for the local GOP meetings and the convention.  The NCGOP is NOT the property owner in either of those cases. (I know there are several ambulance-chasers among our readership. Sound off, folks.  Might they need a court order — something akin to a restraining order — to actually do this in a legit manner?)

This sounds like a great way to fix an election and guarantee a job — and jet fuel! — for Grandpa Robin for two more years.