We reported earlier about a pretty harsh memo from the Administrative Office of The Courts explaining that court officials have two choices regarding gay marriages: perform them, or quit.

On October 10, an Obama-appointed federal judge in the People’s Republic of Buncombe got creative in tossing out the marriage amendment to the North Carolina constitution.

On October 24, Republican leaders in The General Assembly fired off a note to AOC director John Smith expressing their displeasure with his office’s mandate regarding gay marriage.  On November 5, Smith fired back:

[…] I am concerned that reliance by our magistrates upon Title VII of the Civil Rights Act or any other federal acts with identical definitions of covered employees is misplaced. The question of whether appointed judicial officials were included in the protections of those statutes was addressed in Gregory v. Ashcroft, 501 U.S. 452 (1991). That case is a U.S. Supreme Court decision specifically excluding appointed state judicial officials acting in their official capacities from the definition of protected employees as defined in the federal Age Discrimination in Employment Act (ADEA). That act has the same definition of covered employees (2 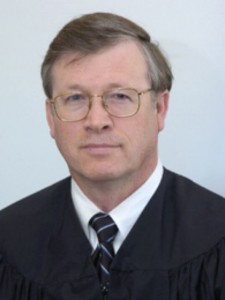 9 U.S.C.A § 630(f)) as that appearing in Title VII (42 U.S.C.A. § 2000e(f)). Ashcroft reviews the legislative history of Title VII, the federal act that requires “reasonable accommodation” of religious convictions as a protection. By excluding appointed state judicial officials entirely, there is no such federal legislation that provides a sanctuary for our magistrates in the exercise of their official powers. I have found nothing in the legal authorities construing GERA referenced in your footnote that would provide any protections to magistrates acting in their official capacity who refuse to equally administer same-sex marriages based upon their religious beliefs. An attempt to distinguish appointed magistrates from this Title VII exclusion failed recently in Nowlin v. Lake City, a 2012 federal district court ruling out of South Carolina. None of the cases cited in your letter addressed judicial officials. Any magistrate relying on the letter expecting relief from the EEOC under Title VII needs to be aware that none of the cases provide coverage of judicial officials acting in their official capacities. […]

[…] As a legal matter, it misunderstands the interplay between Title VII of the Civil
Rights Act and the Government Employee Rights Act of 1991, and it ignores the First Amendment and
42 U.S.C. §1983. Still further, its discussion of the injunctions against North Carolina’s definition of
marriage rests on a false premise, as though even a simple discussion of reasonable accommodation of
individual liberty prevents those court orders from being followed.

More troublingly, your communication lacks any sort of reasonable effort to constructively guide

courthouse officials at a time when such leadership is needed most. Far from misleading anyone, our
October 24 letter encourages thoughtful consideration of a sensitive matter of public law. To actively
discourage such conciliation is inexplicable. As the decision last week from the Sixth Circuit
demonstrates, the legality of same-sex marriage is still being decided by the federal courts. This truth
must be viewed together with the well-established First Amendment right to religious freedom. My office
will continue to do all that it can to ensure that the expansion of rights for some does not infringe on the
liberty of others. Common sense and the United States Constitution require nothing less.[…]

Smith, in his letter, appears to be suggesting that marriage is a church institution.  If that is the case, how are marriages by magistrate not a clear violation of The First Amendment?

I said it before, and I’ll say it again.  Legislators need to simply amend the job description of magistrates to exclude the officiating of marriages.  Upon accomplishing that, the honorables can then get to work on removing state government’s tentacles from the institution entirely.  No more mandatory marriage licenses. Take marriage away from being a gateway to government benefits and return it to what it was initially: a commitment between a man and a woman ratified under God.