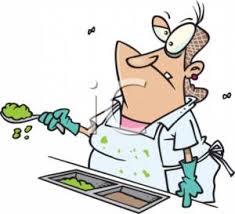 What is it with cutting special insider deals on feeding jail inmates?  We reported earlier on an effort in the House to seek a no-bid deal for food service to the Alamance County jail.   Now, it appears Rep. Julia Howard (a/k/a Richard Morgan’s great-great-grandma) is working some magic along those same lines for the good folks of Davie County.

Howard has introduced a bill seeking to allow the Davie County schools to provide food to the inmates at the county jail.  (Hmm. Based on my experience in high school — and my experience working in a state prison  — I thought jail food and school food were already coming from the same horrible source!)

The “problem” with Howard’s bill?  It conveniently and explicitly dismisses the requirements of NC GS 66-58  which forbids (1) the state from competing for business that could be done by private citizens in North Carolina, and (2) the state from running a cafeteria or restaurant of any kind in a state-owned facility.  They may be the “county schools,” but they sure do run on a whole lot of state and federal money.

* One of those statute thingies ham-stringing you?  No problem.  We’ll just draft a bill OK-ing the ignoring of said statute.*