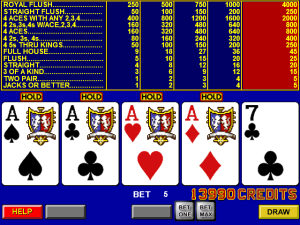 That’s an idea that intrigues us.  Taxes on gambling are paid voluntarily, as opposed to the current confiscatory practices of our state and federal revenue agencies.  Doing something like this — coupled with reducing or eliminating some of the confiscatory taxes — might be something we could get behind.

Setting up a legal framework would bring gambling out of the shadows and produce an economic boom like you see in Nevada.  Surely, the Cherokees out west don’t want to see any competition for their casino cash cow.

We received mail from our good buddy Paul “Skip” Stam this past Tuesday musing about the issue of taxing and regulating video poker:

Friends,  I have heard  that we  will   discuss  video poker in caucus  tomorrow.  Just to be sure  I asked the sheriffs’ ass’n  if they  had changed  their position on this.  I believe it was 2006  when all 100  sheriffs  asked us  to ban vp  because of its  connections with  criminal activity, family impovershment  and  corruption.  Recent state supreme court decisions(including  one on june 11, 2015)   have these  folks  leaving  the state in droves.     I look forward to a good  discussion tomorrow.  Since the Governor, Lt Governor, Attorney General  and the Senate leadership  all oppose vp  we  can    discuss  the pros and  cons  of moving forward with this  proposal.    See you tomorrow. Skip

In case you wondering WHAT ol’ Skip is talking about — it’s HB 922.    And here is what the Sheriff’s Association’s big kahuna has to say about that:

As a follow-up to our recent conversation, this is to confirm that the North Carolina Sheriffs’ Association opposes House Bill 922, Video Sweepstakes Regulation and Taxation.

The sheriffs of North Carolina see first hand the criminal activity associated with video sweepstakes operations and the devastation that their abuse causes to families in our state.

Our current laws outlawing video sweepstakes machines have been upheld by the NC and US Supreme Courts on several occasions, as recently as a few weeks ago.  The US Attorney for the Eastern District of NC recently reached a settlement agreement with several operators of these machines by which the operators agreed to leave North Carolina and to not continue their illegal operations in our state.

The sheriffs of North Carolina urge the General Assembly to oppose any efforts, such as House Bill 922, that would make video sweepstakes machines lawful in our state.

All of the anti-gambling folks can rest easily.  Republican leaders say they don’t plan to touch this with a ten-foot pole.