Why vote FOR Republicans, if they are going to simply do what the Democrats WOULD have done had they been in charge?

Republicans have disarmed themselves of a potent weapon — opposition to tax increases and big government — in their fight with Democrats. That weapon helped pull Republicans out of the wilderness to dominate presidential elections for two decades.  It helped win congressional majorities in 1994 and in 2010 and 2014.  John Boehner didn’t win the speaker’s gavel because we’re fascinated with his tan.  We’re sick of government excess, and THOUGHT the alleged conservative party was going to get us some relief. What part of “Stop Obama and his agenda” is so hard to understand?

It all started when the ENTIRE GOP caucus in the state Senate blessed a short term gas tax decrease coupled with increases over the long-term. (Cary’s Tamara Barringer voted NO, but she told the drive-bys after the vote that she had no problem with the gas tax. Her problem was with other parts of the legislation. So, that makes her just as bad as the rest of them.)

As the bill moved over to the House, we heard even more boo-hooing about an alleged shortage of funds for road construction.  AFP and a lot of other grassroots conservative sources raised a fuss about the tax increase.  But that didn’t seem to matter.  Here is the roll call — documenting the shameful surrender of the “conservative revolution” [Click on graphic below to enlarge] : 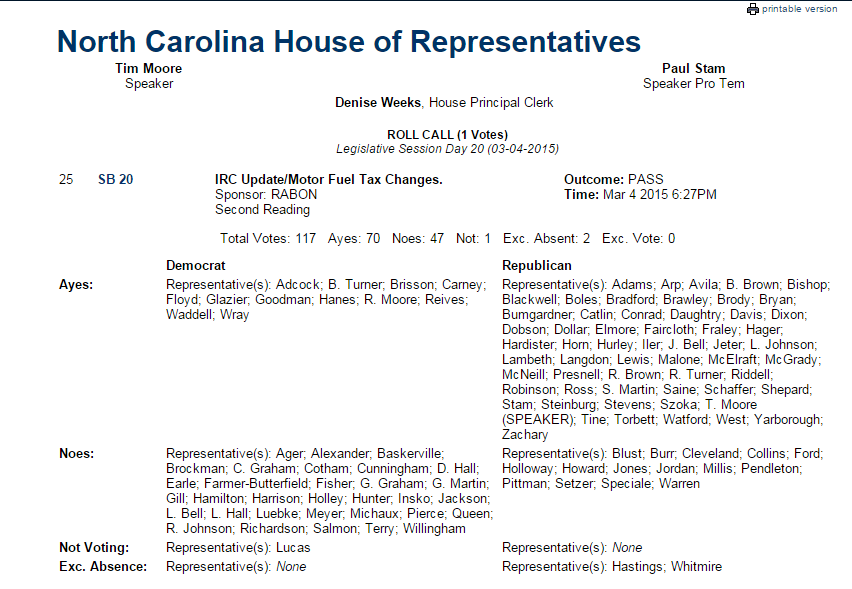 Only 15 Republicans managed to show some spine and stick to their guns. Things got even more shameful on the vote on NC Competes — Gov. Pat McCrory’s $45 million giveaway to major corporations.  (Meanwhile, airlines are getting an extension on their fuel sales tax refunds, and data centers in the state are getting a break on sales tax on their electricity.)   McCrory got shot down late last session when he asked for $20 million.  Given that history, you would have thought $45 million would have been laughed all the way back to Blount Street. But, sadly, that was not the case [Click on graphic below to enlarge] : 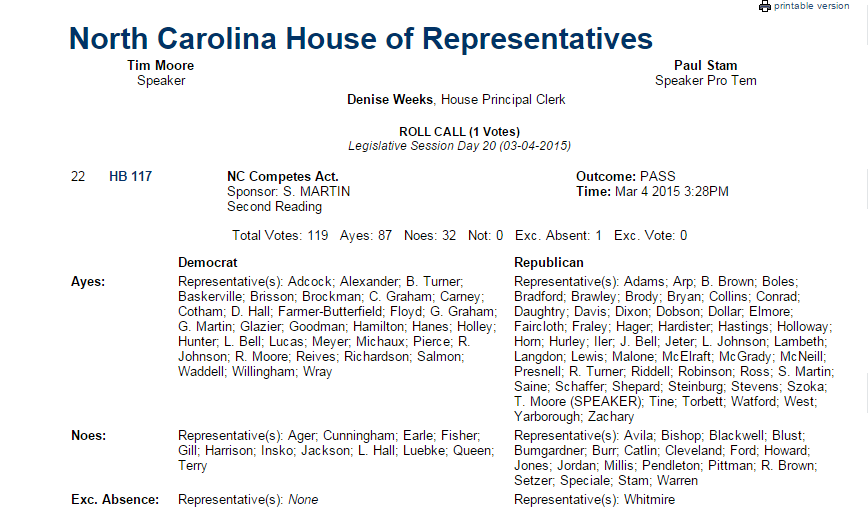 We could only get 19 Republicans to show some spine on this one.

It’s pretty clear that we’ve got another economic crisis on the near horizon.  The NCGOPers on Jones Street have just given Democrats a hell of a lot of cover to survive the coming wrath of the voters.

If they’re not going to actually stand firm on ANYTHING, one has to ask: What does it mean to be Republican?

People with long political memories may harken back to the days of the circa 1960 intra-party struggle between the Rockefeller disciples and the Goldwaterites. In-state, some may remember the circa 1972 feud between the Jesse Helms camp and the left-of-center Jim Holshouser crowd.  Have we come full-circle? Despite all of the evidence pointingn to Republican success being based on opposition big government, is the Grand Ol’ Party going back to its pinky-in-the-air Rockefeller, country-club Republican days when you were Republican because that’s what white people with money DO?

I remember the days when the Jones Street Republicans could caucus in a phone booth.  For the longest time, Republican congress

ional representation was quarantined to Greensboro and Charlotte (and occasionally the Asheville area).  The Democrats were perceived as the small-government party that was looking after Mr. and Mrs. Middle America.  Principled conservatives like Jesse Helms and Ronald Reagan pointed folks toward a new political path.  Republicans started winning by acting like they were serious about small government.

Trying to shore up Pat McCrory is not a good excuse.  Ol’ Pat had no coattails in 2012.  He hasn;t helped any of you folks.  Look at what he did in Charlotte. At one time, Charlotte city politics was competitive for Republicans.  At one point, you had GOP mayors like Sue Myrick and McCrory, and GOP mayor pro tems like Lynn Wheeler.  You actually had some GOP troops on the council. At the end of the McCrory era in Charlotte, Republicans are basically a non-factor in city politics.